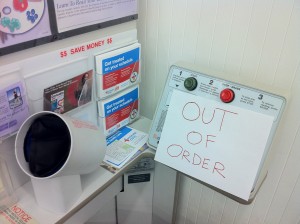 The Sister Wives went shopping at the local CVS pharmacy last Tuesday. Debbie needed some Neosporin for her new cat tattoo—she calls it her “little pussy”—and the Nordic Warrior Queen had to get a prescription refilled.

Since the pharmacy is just down the street from the Sandbar, my wife told her sister that, yes, they could stop for Happy Hour on the way home; she hoped that the promise of beer would keep Debbie calm while shopping.

So while Diane headed back to the drug counter, the Crazy Cat Lady wandered off to find some antibiotic cream for her pussy.

The pharmacist was a good-looking man in his early thirties. He wore a white lab coat and a nametag, which said simply ROBERT. The Nordic Warrior Queen was not distracted by ROBERT’s rakish good looks; she got right down to business. “Do you have a prescription for me?” She’d previously had troubles getting her refills refilled here, and was in no mood to be trifled with.

But ROBERT was a professional. He took her information and briefly excused himself while he went to the shelves, returning promptly with her medication. It’s tough to please the Nordic Warrior Queen, but ROBERT was on his A-game that day.

It was about this time that Debbie returned carrying a tube of Neosporin large enough to treat post-war London. “Are you about done?” she said. “Happy Hour’s over at five.” Seeing as it was nearly 3:30, she was getting a bit edgy.

Diane was ready to go—she had her debit card out, and a great deal of chaos might have been avoided if only she’d been rude and cut ROBERT off mid-sentence—but the young pharmacist was not to be silenced; he insisted on reading the drug warnings to my wife.

Debbie muttered something that sounded like “ducking glass bowl” and stomped off.

ROBERT began by asking my wife if she was pregnant, or was planning to have children any time soon; her prescription medication was known to cause birth defects. The Nordic Warrior Queen scowled at ROBERT, making a small circling motion with her finger: get on with it, you moron.

While ROBERT started on the list of possible side effects—headache, stomachache, chest pain, weakness, shortness of breath, slurred speech, problems with vision or balance—Debbie contented herself by rearranging the store shelves—turning packages upside down, randomly mixing the antihistamines with the diuretics, and strategically placing condom boxes beneath the incontinence supplies.

ROBERT droned on: “Black, bloody, or tarry stools, coughing up blood or vomit that looks like coffee grounds, swelling or rapid weight gain, urinating less than usual or not at all.”

Debbie was becoming agitated. Jesus, would this guy never quit? She tried calculating how many minutes of Happy Hour remained, but quickly gave it up; mathematics has never been her strong suit.

She decided instead to get her blood pressure checked; she was beginning to feel a little stressed out.

She sat down and jammed her arm in the cuff. Why wouldn’t he just shut up already? Like the Sister Wives’ mother—Judy-One-Kenobi—Debbie is prone to high blood pressure, especially in the afternoon. She angrily pushed the button, wondering if there’d be any Miller-Lite left by the time they got to the bar.

Debbie’s blood-pressure numbers were spinning like a Las Vegas slot machine; Diane opened her mouth to interrupt ROBERT—he had just gotten to BLOATING, DIARRHEA and GAS—when…BOOM! There was a massive explosion in the corner, followed by a startled scream.

The blood pressure machine had exploded!

ROBERT the pharmacist and the Nordic Warrior Queen came running. Debbie lay sprawled in the machine, the remains of the rubber blood pressure cuff strewn about like confetti. “What happened?” she mumbled.

She opened her eyes to find ROBERT standing over her. “Are you hurt?” The pharmacist was tall and good looking, with wavy brown hair; she’d always had a thing for guys with nametags.

“I think I hurt my pussy,” she said

“You want to see?” Without waiting for an answer, she pulled her arm from the remains of the machine, tugged up her sleeve, and proudly displayed her new tattoo. “Look, it’s a cat,” she said.

The pharmacist carefully examined her bicep; sure enough, her arm looked somewhat pinched. “Is that a bruise?” He pointed at the cat’s tail.

Debbie pulled her gaze away from ROBERT’s dreamy blue eyes long enough to glance at her arm. “Umm…No. I don’t think so. That’s part of her tail,” she said.

Debbie nodded her head and smiled. “My son’s studying to be a pharmacist, you know. He’s in Chicago.”

Debbie looked startled, then jumped up and ran for the door. ROBERT raised his hand. “Wait,” he called. “What about the machine?”

The Nordic Warrior Queen gave him the look. “What ABOUT it?”she said, and pointed at her sister. “She could have been hurt.”

ROBERT took one look at my wife’s face and began backing away. “Yes, um…I see your point. Don’t …don’t forget your medication.”

Three minutes later, the Sister Wives climbed into the car. Diane turned the ignition, and put the Explorer in reverse. Debbie glanced over. “He was kind of cute.”

The Nordic Warrior Queen rolled her eyes. “Jesus, Deb. He was nearly half your age.”

The Sister Wife shrugged her shoulders, nonplussed. “So?”

1 Trackback or Pingback for this entry