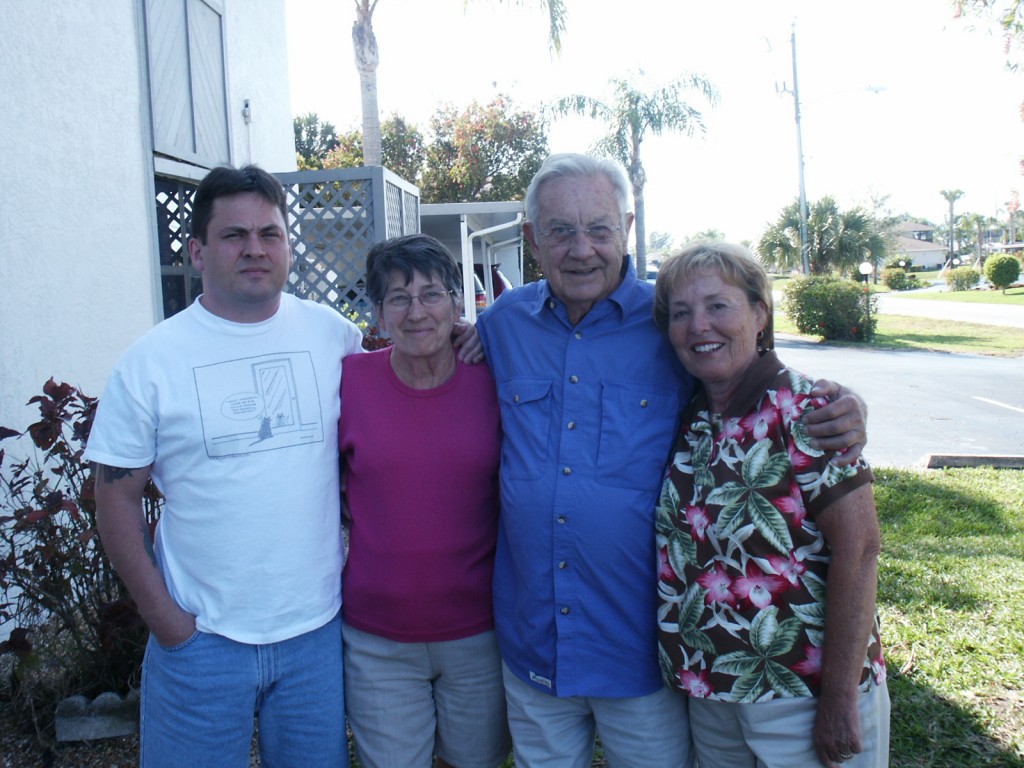 I like to think that most of us, while growing up, meet a few people who touch our lives in some small way, who help to repair—at least a little bit—the fraying tapestry of our troubled youths.  Chip Proshek was one of these.

I first knew him as Dr. Proshek. He was an orthopedic surgeon, and while I was still struggling with the many challenges of training-wheels, he was performing surgery on my mother’s back. With today’s medicine, that same surgery might have been no big deal: a small cut here, a bone screw there, a few days rest and maybe she would have been up and around. Who knows? If Chip were here, I’d like to ask him.

As it was back then, I remember my Mom wore a body cast for months. I remember the visits to the hospital after the surgery, and I remember her clunking around the house in her metal walker when she came home. Whatever Chip did, however, worked—Mom’s been free of back problems ever since.

One side-effect of the surgery was that Chip became a good friend of the family. He came to our house on Thomas Road for holidays celebrations, birthday parties, occasional dinners. Growing up, it seemed to me that Chip was always around.

Chip was there the day I stupidly jumped head first from a ladder into a too-shallow pile of leaves. I can still hear the crunch in my neck when I hit the ground; can still feel the excruciating pain as I stumbled back to the house in tears.

Looking back, I was lucky to have felt any pain at all—I could easily have damaged my spinal cord and be riding a wheelchair today, or worse. But Chip was there that day, visiting, and he fixed me up. That’s what Chip did—he fixed things.

Chip once tried to fix up my brother Kelly, too, at least as well as he knew how. One day not long after the leaf-pile incident, I came home from an afternoon at the creek—flipping bullheads onto the muddy shore, or exploring the murky recesses of the dam—to see Chip’s car in the driveway.

I parked my bike alongside the garage and ran through the front door, eager to see Dr. Proshek. But once inside, I found the living room empty, as well as the patio, the kitchen, the dining room. Where were the grown-ups? And then I heard the crying.

I found them in my brother’s bedroom. My parents and Chip stood in an uneasy semi-circle around Kelly’s bed. He had come home a few minutes before me, weeping, sobbing terribly, and gone straight to his room. By now his face was red, and he couldn’t catch his breath.

None of us knew then why he was crying so—I’m sure my parents thought it must be one of those teenage things: hormones, maybe, or girl trouble. Not even Dr. Proshek knew about depression back then.

Seeing my big brother in such an awful state, of course I began to cry as well. That probably didn’t help the situation much, but I was only eight years old, after all. Despite the uncomfortable chaos of weeping children and distraught parents, Chip took charge: he went into the kitchen, grabbed a paper lunch sack from the unruly pile stacked alongside the fridge, snapped it open and made Kelly breathe into it.

What kind of magic was this? Chip may not have recognized depression, but he did recognize hyperventilation. While the afternoon sunlight streamed through the open window, I stood there between my parents, watching my brother huddled there on the edge of the bed with tears running down his face. We listened to the crinkly sound of the paper bag, the hoarse bark of Kelly’s sobs, until finally his breathing returned to normal.

In my young mind, I thought things had returned to normal. Perhaps we all did. But sadly, there are some things that can’t be fixed, no matter how skilled the surgeon. Kelly committed suicide not long afterwards. Chip was at the funeral with us that terrible day, and came to our home afterwards in support.

He was there for us, but that’s not to say Chip didn’t have his own problems. It was some time after this that he went through a difficult divorce (aren’t all divorces difficult?) and had to move to a smaller place; as a result, Chip had to find a new home for his dog.

So Wernher, as in Wernher von Braun, came unexpectedly to live with us one day. No one ever suggested that Chip had named his dog after a German rocket scientist, but knowing Chip’s sense of humor, I have to wonder.

We were between dogs at the time. To us kids, at least, Wernher’s arrival was a welcome surprise, especially as we’d never had a little dog, let alone a Dachshund—an alien, wiener-shaped dog with stubby legs and ears that dragged on the linoleum (we had always been big-dog people).

We butchered his name, arguing in our Minnesota accents whether he should be called wer-ner, ware-ner, or vair-ner.  I’m sure the dog was confused, but he didn’t show it; when called, he always came running as best he could, no matter how his name was pronounced.

To this day, I’m unsure whether my father knew the dog was coming. What I do know is he arrived home from work one day to find his wife and remaining children in the master bedroom, watching TV on my parent’s little black and white set; we lay sprawled across every square inch of the king-sized bed, a fifteen-pound torpedo-shaped dog in our midst.

My father was never one for animals on the furniture; he felt it to be rude behavior. “What the hell is that dog doing in my bed,” he bellowed, pointing his finger at the canine intruder.

Wernher was having none of this, and he let my Dad know it. The dog didn’t cower, or hide under the bed, or scramble for the doghouse. No. Wernher jumped to his feet, gave a ferocious bark (considering his small size) and chased my father into the bathroom, nipping at Dad’s heels as he fled.

After that, Wernher was firmly a part of our family; even my father came to love him, once he’d recovered his pride. Wernher was with us during the time between my brother’s death until shortly before my parent’s separation.

He was the family’s dog, but he was especially my dog, and he taught me the special love and security a small boy can feel from a canine friendship—that whole “a boy and his dog” thing is really true. Wernher also once taught me to let sleeping dogs lie: never wake a fifteen-pound Dachshund  by lifting his floppy ear and blowing into it: you are likely to get bit in the neck.

One spring day, I found him lying in the back yard, not far from the spot where years before I’d pile-driven into the too-shallow leaf pile. My young mind told me the dog must be sleeping—I called and called, afraid to come closer, yet Wernher never woke.

He’d been poisoned, some said by the guy in the big two-story across the creek; others said he must have gotten into some antifreeze. Whatever the reason, I buried him in the back yard, under the second to last oak tree, and up the hill from the big clump of sumacs at the edge of the creek.

Chip was a handy fellow to have around, and his skills extended past the operating room. One autumn weekend, my father took his two boys on a camping trip: to an island on Gull Lake, I think, but I wouldn’t swear to it—there are a lot of lakes in Minnesota, and nearly as many islands, and this was nearly forty years ago.

What I do remember is there were a whole bunch of us there: the same group, mostly, that went deer hunting each year – my Dad and Kirby, Uncle Boyd with my cousins Eric and Gunnar, Hoppy and his snotty kid, my Aunt June’s son Gil, and grumpy George Taintor.

And Chip was there too, even though he’d never gone deer hunting with us—maybe Chip only enjoyed fishing, but considering his vocation, it’s certain the sight of a gutted deer wouldn’t have bothered him. I’ll never know. But it’s a good thing he was there with us that weekend.

The island was covered in tall pine trees, many of them old and rotten. While the grown-ups made camp, Gunnar and I immediately set about climbing the tallest one whose bottom branches we could reach. Soon we were high in the air—Gunnar sat straddling a branch on one side of the tree; I sat on the other.

Someone said afterwards we were at least forty feet up, but that may have been the beer talking. What I do know is that, as I sat enjoying the view of the lake, I heard a large crack, and turned to watch my cousin tumbling towards the earth.

Gunnar hit every branch, Rambo-like, on the way down. Crack, crack, crack, crack, but Gunnar didn’t make a sound, at least not until he hit the ground; when he did, there was this awesome whoof as he had the wind knocked out of him.

I’m not sure whether it was that final impact with the rocky earth—or one of the many branches he crashed into—that broke his arm. But once again, Chip was there to fix things up: he quickly pulled out a pocket-knife, reached for one of the many branches now lying on the ground, and carved an impromptu splint, setting Gunnar’s arm there on Gull Lake with some strips of cloth torn from a donated t-shirt.

At the time I was reading this book, “Life with the Pioneers,” and I thought then that Chip would have been a good one to have on the old wagon trail, headed west. He didn’t help me much that night, however, after I’d eaten one too many camp-fired hotdogs: I barfed all over Kirby’s sleeping bag in the middle of the night. Chip slept right through it.

There were other memories. Chip soon remarried, and over the next few years my family spent some time with his new wife Susan and their kids. I don’t recall their names—Jeff, maybe, and one or two others. That was a long time ago.

I’ve seen him once or twice since then. One Saturday afternoon, I visited Chip and Sue at their home just east of Excelsior, and spent a couple hours fixing up his computer, defragging the hard drive and cleaning out the temp files. In return, he fed me beer—Michelob Amber—each one served in a frosty glass.

And I saw him again a few years ago, while visiting my Mom in Florida. I didn’t know then it would be the last time. Chip was a good man, and the world is a lesser place without him.