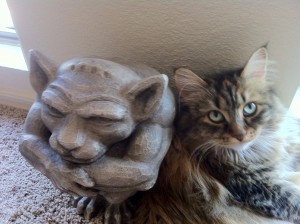 Since the Sister Wives left me, I’ve had to fend for myself.

While they’re off visiting relatives in Minnesota—people who unselfconsciously say words like uff-da and puh-tay-toe, and who consider Leinenkugel beer a food group—I’ve had to do my own laundry and wash my own dishes. I draw the line, however, at dusting and vacuuming. The dirt can wait.

And since the Nordic Warrior Queen frowns on too frequent patronage of the fine dining establishments across the street, I’ve had no choice but to prepare my own meals: bologna sandwiches, beef pot pies, and frozen pizzas.

Worse, now that the Crazy Cat Lady lives with us, I’ve had to carry her weight as well. This includes such  monotony as the collection of mail—the Nordic Warrior Queen and I are, with the stubborn exception of ATT, paperless—yet the Crazy Cat Lady every day receives bushels of feline-related periodicals, pet care coupons, and ads for singles dating services.

And then there’s the watering. Since she still thinks she lives in Minnesota, and can grow patio tomatoes and potted begonias in the middle of summer, I have to water them five times a day. Doesn’t she know it’s a desert?

One good thing has come out of the Sister Wives’ absence, however: I don’t have to put the toilet seat down. But after thirty-some years of marriage, I find that I could no sooner pee without putting the seat back down than I could walk down the street naked while playing a trombone.

One other task I forgot to mention—I prefer not to think about it—is the feeding, watering, and cleaning up after the Arctic Wooly Übercat.

What! I never signed up to be a wild animal trainer.

The Crazy Cat Lady says it’s only fair. I don’t really care what she says, but my wife agreed. After all, she fed my bird when the Nordic Warrior Queen and I went to Hawaii. Oh, and what about those trips to Sedona? Prescott? Payson?

Okay fine, I get it, but Chester the Gray bird eats seed, pellet, and an occasional piece of apple. In short, birds are easy to care for—they don’t eat nasty, smelly canned food that looks a lot like recycled vomit, nor do they fill a dumpster-sized cat box with humungous piles of crap two times a day.

The Übercat soon realized who was filling her food bowl, and taking away her foul droppings. Now we’re the best of friends; she tries to rub against my legs, visits me at all hours of the day, and has decided it’s a fine idea to sleep in my bathtub—probably because it’s the only place large enough in the entire house to contain her massive bulk.

This last part shouldn’t be such a big deal—after all, I only shower once a day; I can easily wash the hairballs and wads of fur down the drain when I do. But it’s disquieting to get up in the middle of the night, walk to the bathroom to urinate, and find a cat the size of a mountain lion peering at me from around the curtain.

Sometimes when this happens, I scream like a little girl.

The Übercat only looks up, disdainful. “Hey, are you going to flush this time,” she’ll say, and saunter off like she owns the place.

After a few nights of this, I’d had enough. While preparing for bed, I filled the tub with water and pulled the curtain tight; the Übercat—despite her preternatural senses—would suspect nothing.

Shortly after midnight, there was a loud splash, followed by a tremendous yowling—the sound of an angry beast—and heavy footsteps fleeing down the stairs. The trap had worked. I smiled and went back to sleep; my cat troubles were over.

I woke several hours later—I’d had a terrible dream of being smothered by a wooly mammoth, one who smelled like Tuna-flavored Friskies and growled that her dinner was late.

Dreams are funny sometimes, but this one seemed at least partly true—a weight heavy as an elephant pushed against my chest, and I struggled to breathe. Jesus, I must be having a heart attack. I had to call 911, but couldn’t move; my cell phone was out of reach.

Desperate to breathe, I lunged for the bedside lamp, flicking it on to find—the Übercat.

She sat there on my chest, licking her fur, cleaning herself before the kill; I was trapped. She stared down at me, her gaze steely. “Don’t you know cats don’t like water?”

“Damnit, get off me, you stupid cat. I can’t breathe.”

She wouldn’t budge. It felt like being crushed beneath a pickup truck.

“C’mon,” I said, gasping. “It was only a joke.” I was beginning to lose feeling in my toes.

“When the mice are away, the cat will play.” She referred to the Sister Wives’ being in Minnesota.

“What…what are you going to do?”

After a moment, she stood. She did it slowly, relishing her hold over me—the terror only she could command. Then she turned, and put her butt in my face.

“Payback’s a bitch,” she sneered over her furry shoulder. “When you least expect it…asshole.” She chuckled grimly and went downstairs. Moments later, I heard the sound of her sharp claws, scratching in the catbox.

I haven’t slept a wink since. Please come home, Crazy Cat Lady. Save me from your Arctic Wooly Übercat.

Previous Post
« At the Pharmacy
Next Post
Waiting at the Sonic »
Mr. Ass
Calotropis Theme designed by itx