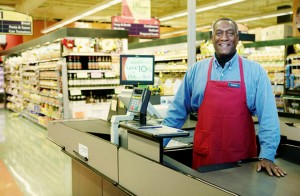 Once again, I found myself at the grocery store, buying stuff for dinner. The Nordic Warrior Queen wanted au gratin potatoes, and the Sister Wife was out of beer. Again.

I decided to boycott Whole Foods. Any store that makes such a big deal over a stupid block of pasteurized processed cheese food doesn’t deserve my business. Besides, Albertsons is closer. They’re just across the street, right next to BJ’s, and the CVS Pharmacy with the broken blood pressure machine.

I was in a bad mood. The magazine editor ripped me on my platinum machining article, and my customer in Utah was pissed off about their software.

It didn’t help that, once again, I’d picked the cart with the busted wheel.  Wheek, wheek, wheek, all through the damned store. Everyone stared at me in the produce section, and the guy stocking the dairy case actually laughed. “Guess you got a noisy cart there, huh? Yuck, yuck.”

The line went all the way back to the Campbell’s soup display. By the time I got to the checkout, I was ready to ditch the cart and order takeout.

That’s when I found out why the line was so long.

The cashier, BOB, was a wannabe comedian at the local standup club. He was trying his material on the customers. When he got to the woman in front of me, he broke into song. “I beg your paaardon. I never promised you a roast, daaarling.”

Then he told her a joke about Jerry Falwell and Ronald Reagan at the Pearly Gates. The woman emitted peals of laughter. She looked ready to bear his children.

I didn’t get it, but I pretended to listen anyway, hoping that by doing so, Bob would recognize I’d already participated in his little comedy routine, and spare me another joke. I wasn’t in the mood.

No such luck. “Did you hear the one about the golfer?”

I slid my debit card into the machine. “No, Bob.”

“Want to hear it? Great. So this golfer makes a terrible swing on the 18th hole. The ball slices to the right, bounces off a tree, and hits a schoolbus. It goes through the window and hits the driver. The bus crashes, killing everyone on board.”

I pushed the button for cash back. I might need a beer on the way home.

Bob continued. “The golfer is devastated. He goes into the clubhouse and orders a drink, and then another. On the third one, the bartender asks the golfer if there’s something wrong. So the golfer explains how his terrible slice had sent the golf ball onto the freeway, killing a busload of children. ‘Oh, what should I do?’ cried the golfer. To which the bartender replied, ‘Oh, that’s easy. Just adjust your stance a little bit, and choke up on the club.’”

Everyone around us laughed hysterically, none more than the cashier. When he realized I hadn’t joined in, he put his hand on my arm. “What’s the matter?”

I looked up at him, deadpan. “My family was killed on a school bus.”

Horror dawned on his face. “Oh, no. I am so, so sorry. I feel just awful.” His eyes welled up with tears. “Is there anything I can do, sir?”

Bob watched in silence as I walked smiling out the door. My bad mood was gone.