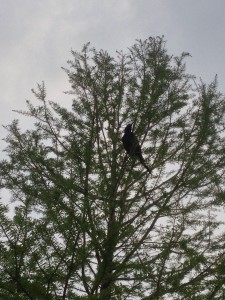 After the Dancing with the Stars affair, I had to change restaurants. No more sports bars for me. Those Texas baseball fans are crazy.

There’s a Coco’s close to the hotel where I was staying, but they don’t serve beer. So I went to Chili’s instead. It’s a little farther, but the Nordic Warrior Queen says I can afford to lose a few pounds, and I decided to walk.

It was a beautiful evening for Texas: 100 degrees and 90 percent humidity. I was soon sweating like a pig.

My reader glasses were perched on the top of my head. Sometimes I’ll text and walk, and my readers will be on my nose, but I almost fell down a staircase last week so I don’t do that anymore. Anyway, it was overcast, so I wasn’t too concerned about my hair catching fire like the last time I was outside with readers on my head.

I was approaching the parking lot when I realized I was being watched. No sooner had this thought crossed my brain than I heard a strange whooshing noise from behind and was struck on the head.

“Raawwk.” Some fucking crow tried to take my glasses!

I stood underneath the tree looking up at that black bastard. He didn’t care. With his beady little eyes, he stared right back at me, until I realized the people in the restaurant were looking at me and I left him alone.

He let out a raucous, “Fuck you!” as I walked away.

The next night, I was once again hungry. Coco’s still wasn’t serving beer, so off to Chili’s I went. And for the second time, that damned crow attacked me. This time he even crapped on my shoulder for good measure, then sat triumphant in the tree, laughing at me.

But the third night, I was ready. I crossed the parking lot, my Jedi senses ready for the attack. Just as he was about to strike…WHAM, I reached up and grabbed his spindly little legs.

He fought like a cornered lion. I didn’t care. Grabbing him by the neck, I got that antagonistic avian down on the ground and proceeded to pluck out his tail feathers, one by one.

The now trapped crow gave out a strangled caw.

“You thieving asshole. I’ll teach you why opposable thumbs are better than wings.”

That’s when I heard the voice. “Just what in the tarn hill do you think you’re doing?”

Still clutching the once combative Corvidae, I turned around to see a tall man dressed in green. He looked like an anal-retentive Robin Hood.

“Why aren’t you in San Diego, Ranger Bud?” I said, careful not to loose the grip on my foe.

“Oh,” stammered Bud. “It’s you.” He seemed embarrassed. “ Yeah, well I got tired of all them hippy types and tree huggers out there in southern Californ-eye-ay,” he said defensively. “They drive me nuttier than a two-peckered Billy goat.” He actually said that.

Ranger Bud continued. “Besides, I’ve got me a powerful hankering for line dancing and plump cowgirls. Now, you got a permit to handle that crow, or what?”

“Bud, I was defending myself. He attacked me.”

Bud handcuffed me and tossed me in the back of his Texas-issue Chevy Tahoe. It smelled like duck. “What the hell are you keeping in here, Bud?” I protested.

“Road kill, pardner. Now you just keep quiet back there and we’ll rustle us up some Hank Williams tunes.” Bud was taking the whole Texas thing way too seriously.

The misplaced San Diego Park Ranger took me all the way to the Fort Worth courthouse, where I had to stand before a judge named Leroy Bean and was fined $250 for mistreatment of a treasured species.

“It was a fucking crow, Judge.”

“Guilty,” he shouted. Ranger Bud led me down the hall to the country clerk. Luckily, they accepted credit cards.

At least Ranger Bud was decent enough to give me a ride back to the hotel. I was so worn out from my adventure I decided to walk over to Chili’s for a beer. The crow was still there, waiting for me.

I sure wish Coco’s served beer.