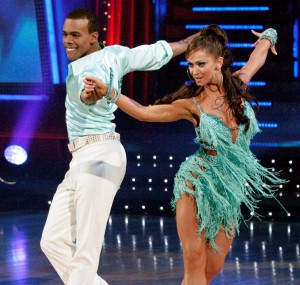 Ever since the Nordic Warrior Queen and I started dance lessons, a terrible feeling has come over me.

Don’t get me wrong. I thoroughly enjoy doing the two-step with my wife. But I’ve begun to have thoughts no man should have to admit.

I can’t stop watching Dancing with the Stars

I’m not proud of my obsession.

I admit, however, that while out of town on business recently, eating dinner at a local sports bar, I asked the waitress to change the channel. “Can you switch that to Dancing with the Stars?”

Bear in mind it was Spring Training. The place was filled with rabid sports fans.

“C’mon,” I protested. “You have fifty-four TVs in this place. Can you please just change the channel on one of them?”

She came back with the manager. “Sir, I’m not sure we can do that.”

He knew I meant business. “It’s just one TV. Leave the volume down if you must.”

“Well…it is Zendaya and Val’s big night,” he said, relenting at last.

The place had a maximum capacity of 310 patrons, and 309 of them turned to stare at me.

“WHAT THE FUCK ARE YOU WATCHING?” screamed a troll-like young man in a Houston Astros cap.

His wrath meant nothing to me. “Look at those moves, dude,” I said. “The Foxtrot, and the Viennese Waltz. And look at that Samba! Have you ever seen anything more sensual?”

He had to admit, the dancers were very elegant. He ordered another beer and came to sit down next to me. “Beautiful,” crooned Chuck.

His buddies were unimpressed. “CHUCK! WHAT THE FUCK ARE YOU WATCHING?” Apparently, Bud Light makes for a potty mouth.

It wasn’t long, though, before they were likewise convinced. Chuck and his friends were now undying fans of Dancing with the Stars.

That didn’t do much to convince the opposing side. “WHAT THE FUCK ARE YOU GUYS WATCHING?” yelled enough Texas Rangers fans to man a battleship.

Chuck was in no mood to put up with that shit. “YOU GUYS ARE NINNIES,” he yelled. Chuck wasn’t big in the vocabulary department.

“NO, YOU ARE!” yelled the Rangers fans, whereupon Chuck picked up a bar stool and launched it with the misplaced vehemence of a North Korean cruise missile.

That was when the restaurant manager called the cops. It was time for me to go. I threw a twenty on the table and ran for the takeout door.

Five minutes later, I sat in my hotel room, watching the lights of the entire Fort Worth police department as they hauled away hundreds of Baker Street Pub and Grill patrons, still arguing about Lisa Vanderpump’s low score in the Cha-Cha.

Chuck was right. Those dancers are beautiful. But it might be better to watch them from home.