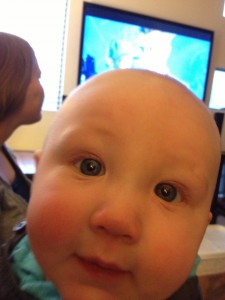 My grandson Logan and I were sitting on the couch watching Terminator when the kid turned to me. “You know something, Papa?” he said. “Linda Hamilton is hot.”

I looked down at his chubby face, the splotch of crusted breast milk on his t-shirt. “Dude, you’re six months old. How would you even know?”

A thin runner of drool trickled down his chin. “I especially like the part where she says, ‘Watch it for me, big buns.'”

I tried to explain it to him. “Listen, Dumptruck. She’s not your type. Believe me.”

The longer he watched the TV, the more excited he got. “Why not? She’s a total babe.” He was bouncing up and down by now.

“No breast milk, Logan.” There was little sense in hiding it from him.

He started to cry. “No, Papa. No!” He shook his head, finally coming to grips with the reason for Linda Hamilton’s smallish breasts.

Once he composed himself, he looked up at me, clearly distraught. “Really? I’m afraid.”

With a final sniffle, he shook his head. “No. I’m not hungry yet.”

“Moms are good for a lot more than milk, Dumptruck.”

He rolled his eyes and chuckled. “Yeah, right.”

When the Cadillac chase scene started, the kid began flailing his arms about. He looked like a plump windmill. “You’re not going to start the dancing baby thing, are you?”

“That’s so 90’s, Papa.” He glanced at me disparagingly. “Dad was right. You really are an old fart.”

I ignored the comment. On the TV, Arnold Schwarzenegger was using a machine gun to mow down the Los Angeles Police Department.

Dumptruck was squirming on my lap. “What’s your problem?” I said at last.

He seemed uncomfortable. “Damnit, I think I just sharted.”

Sure enough, the distinctive odor of baby crap was filling the room. “Jesus Christ, Dumptruck. Your dad never shit on my lap!”

“That was nearly thirty years ago, Papa. I’m surprised you can even remember back then.”

“Watch it, kid. You have a birthday coming up.”

He grinned. “Besides, Nana said you never changed a poopy diaper in your life.”

I protested. “That’s not true! There was that time after the green beans, and…well, it was a lot more than one time.”

Dumptruck was unimpressed. “Whatever,” he said. Another fruity noise escaped the back of his pants. “I’d like to get down now, Papa.”

“You have no class, kid,” I said, and handed him to his mother on my way out to the garage. I needed a beer. Being a grandparent’s a lot of work.

Previous Post
« Sam Champion and the Comet
Next Post
Dancing with the Stars »
Mr. Ass
Calotropis Theme designed by itx