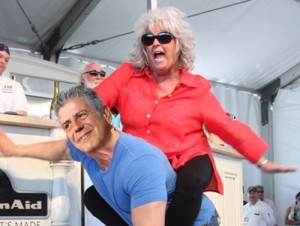 The Sister Wives went to the movie theater this afternoon. The Crazy Cat Lady  said she’d pay (turned out she had free tickets) and the Nordic Warrior Queen wanted to see Silver Linings Playbook. Ever since Hangover, she’s had a thing for Bradley Cooper.

I took a rain check. I’m more of an action movie kind of guy. But to show that I wasn’t sore at being left home alone on a Saturday, I decided to surprise them with a nice meal.

But what to make?

My wife likes Paula Deen, and would watch Paula’s Home Cooking all day long if she could. Maybe it’s the southern accent, or her witty sayings. Whatever the reason, I made a quick phone call. Paula would have some ideas.

“Well butter my butt and call me a biscuit! It’s Mister Kip.”

As it turned out, she was just down the street at the Mayo Clinic, undergoing a quick angioplasty. “I oughta tell ya, I’ve been shakin’ like a hound dog tryin’ to shit a peach pit over this thing. Turns out it warn’t nothin to worry about a’tall.”

I asked her if she could help me out with dinner.

“I tell you what, old son. Soon as I can git this doctor to shut his pie hole, I kin be over in two shakes of a lamb’s tail. But he’s slower than molasses going uphill in January, so in the meantime you just hump your little tuckus over to the grocery store and wrangle us up some chicken and cornbread fixings. We’ll whip up a meal your Nordic Warrior Queen won’t soon forget.”

Paula was waiting at the door by the time I returned from Albertson’s. “Sorry I’m late,” I said. “I got stuck in line with Bob the Comedy Cashier.”

“I swear, that man’s elevator don’t go all the way to the top.” She cackled at her wit. “But let’s git inside now y’all. It’s drier than a popcorn fart in this state and I need me a cold one.”

Unlocking the door, I asked about the angioplasty.

“That doctor’s so dumb he couldn’t pour piss out of a boot with the instructions written on the heel,” she said, and grabbed up a bag of groceries. “Can you believe he said I cain’t have no more butter?” She said it like budder. “I told him if you can’t run with the big dogs you might’s well stay on the porch.”

She followed me to the kitchen, cussing out the man who’d saved her life like he’d voted for Abraham Lincoln. I opened the fridge and began putting away the groceries.

“Wooeee,” exclaimed Paula. “Lookit all that Miller Lite! The Sister Wife’s gonna be busier than a one-armed monkey with two peckers. Suppose she could spare one?”

I handed Paula a beer. “What should we make?”

“Ain’t no food like southern food, son. What say some fried chicken and beeskits?”

“Never heard of corn beeskits before!” she said. “Are you daft?”

Paula rolled her eyes. “That’s what I said. Boy, you could start an argument in an empty house. Now fire up that burner and tell me where I can freshen up. I’m sweatin’ like a whore in church.”

I pointed to the bathroom and started breading the chicken.

On her way back, Paula grabbed another beer. “Lord, this town’s hotter than a Billy goat’s ass in a pepper patch. Now where you hidin’ the bacon grease?”

“What for? I’ll give you what for! Lordie, every good cook knows you have to fry chicken in bacon grease.”

“I think I’ll take care of the chicken, Paula. Maybe you could start on the beeskits.”

She ignored my jibe. “Fine. Gimme some aiggs then.”

I handed her the eggs. “Here’s your aiggs. Flour’s up there,” I said. “In the cubberd.”

Paula put her hands on her substantial hips. “Is you mockin’ me, boy?”

I tried to change the subject. “What’d you think of that interview with chef Anthony Bourdain? He said your cooking makes you the most dangerous person in America.”

“That fucking Frenchman’s more confused than a fart in a fan factory. Do I look dangerous to you?” she said, and smiled like a Great White.

I could tell I’d hit a nerve though. Paula was whipping the biscuits into a froth. Batter flew everywhere. “He only thinks he’s a chef. His coq au vin stinks so bad it could knock a buzzard off a gut wagon,” she said.

You northerners don’t know nothin.” She picked up the spoon, licked it clean of batter, and dropped it back in the bowl. “Yummm,” she said with a smack of her lips.

“I told you before, Paula. I hate it when you do that.”

“Well, who peed in your cereal bowl this morning?”

I took the bowl away before she could do any more tasting. “I wish we had some cheese for the biscuits.”

“Lord, ain’t that the truth. Everything’s better with a little cheese on top. Still, you can put wishes in one hand and shit in the other. Wait and see which one fills up first. Hahaahaaahaaahaa.”

Now I remembered why I never invited Paula over for dinner.

“’Scuse me,” she said. “I gotta piss so bad my eyeballs are floating.”

While Paula went to the little girl’s room, I dropped the chicken into the deep fryer. The first piece was floating by the time she returned.

“Well, I have to skedaddle,” she said, wiping her hands on the back of my shirt. “Me and that short order cook Anthony Bourdain are having us a showdown on Iron Chef tonight.”

I’d only bought two chickens, so I was a bit relieved she was leaving. Paula loves her fried chicken. “Good luck, Paula.”

“Ain’t about luck son,” she replied. “Bourdain ain’t got the good sense God gave a goose. His ass is grass and I’m a lawnmower. Hahaaaahahahaaaaa.”

I walked the Queen of Southern Cuisine to the door. “Don’t take any wooden nickels, Paula.”

I closed the door and went back to the chicken.

She’s a nice lady, but I think next time I’ll call Emeril.