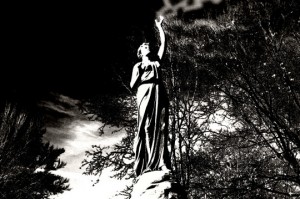 After too many rewrites to count, I finally placed “When you Sleep” with Static Movement, a “for the love” e-zine and publisher. Thanks, guys

The police report is dated June 17, six months ago yesterday. It was Friday night, and school was out. Tim and I were in my Dad’s car, cruising around the lake, on the far side of the tunnel where it crosses under the parkway. That’s where I killed her.

I wasn’t high. Tim was smoking a joint, and maybe I’d had a hit, but I was fine to drive. The problem was Tim: he kept messing with the car stereo, even after I warned him off. So I smacked him. Just a little whack on the side of the head and all hell broke loose. He got up in my face, yelling at me, and then WHAM, I saw a flash of color on the passenger side and the wheels thumped, like when you take a speed bump too fast.