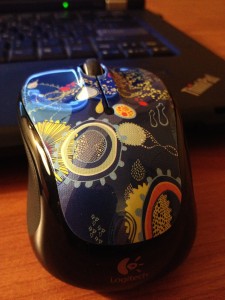 I told the Nordic Warrior Queen I had to leave early. I was headed to Salt Lake City, to work with those cheerless Mormons and the people who make fun of them, and I needed a new mouse.

She was skeptical. “Didn’t you buy a new mouse last week?”

I told her I must have misplaced the last one. It happens. “They’re only fifteen bucks.” Geez.

“Everything adds up.” She was feeling frugal today.

I stopped at Best Buy (it’s on the way to the airport) and went straight to the shelf where I’d bought the previous mouse. I got the same model, except in a different color. That way the little USB thingy—the dongle—would still work if the old mouse showed up someday.

I wanted purple, but it was the only one left on the shelf. I don’t buy the last one of anything. Worse, if I bought purple, the Sister Wife would crack jokes. “Purple is gay,” she’d say. “Guys named Kip are queer.” I really don’t get her sense of humor.

I grabbed the one with the seashell design. I like sea creatures. They’re mysterious. How do all those crustaceans and anemones and jellyfish survive under the crushing weight of the ocean, and deal with all that darkness?

I carried my mouse with the mollusks and cavorting seahorses design to the checkout. I dreaded the thing’s vacuum-packed plastic shell. Opening one of those is like trying to get into Jenny Manning’s pants in sixth-grade. Impossible. Since I didn’t have any tools in the car, I’d have to use my teeth. I’d be lucky to avoid a dentist visit.

The checkout girl put down her cell phone long enough to ask me if I had a Best Buy Rewards card. I do, but when I signed up, they spelled my name TIP, and I have to go through the whole story again, and explain that I’m really KIP, not TIP. They always have to call for a manager. “No,” I said, and scowled, so she wouldn’t pursue it.

“Will you be extending the warranty on your purchase today?”

Really? For a mouse? I shook my head.

In the tone of voice used when teaching a toddler why they should no longer crap in their pants, she explained why a warranty for a fifteen-dollar mouse made sense. “It’s only four dollars, and you get two years parts and service.”

“Do you know why they’re called mice?”

She stared at me with a confused look, like I’d just announced I was Charles Manson.

“They used to come with these long cords, and plugged into the back of the computer.” She wasn’t getting it, so I pantomimed a mouse tail by putting my finger across the back of the package. “They looked like mice. Understand?”

This sort of customer behavior wasn’t covered in the Best Buy training manual. She giggled nervously, and made a small hand motion to the security guard. “I see.”

The security guard ambled over. He smelled like Burger King french fries, and his name tag was—somewhat predictably—labeled BUTCH. “Is there a problem sir?”

“No, Butch. No problem at all. I was just explaining to—” I stopped to read her nametag. “I was just telling Kristy why wireless pointing devices are called mice. And to help explain why I don’t need an extended warranty for a crappy piece of plastic, rubber, and circuitboards.”

Butch seemed dubious. “You can never be too careful, sir. Extended warranties are a wise investment.”

I picked up my seashell mouse and headed for the door. “Have a nice day, Butch.”