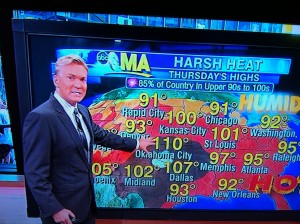 Sam Champion, the weatherman on ABC, must be colorblind. That, or he simply doesn’t care about his viewers. Why does Midland, Texas, with a paltry 102 degrees, deserve to be colored deep red on the Good Morning America weather map, when Arizona, with its 111+ temps for weeks on end, is only pink?

All summer long, we’ve suffered the same mistreatment. There he stands, going on and on and on about the heat wave in the Midwest—the blistering temps, the drought conditions and warnings of heat exhaustion in Texas and Oklahoma, with never a word about Arizona.

Hey, Sam! It gets that hot every day in my zip code. Last night, Scottsdale was 108 degrees at midnight. Arizona can have a weeklong cold spell and still be hotter than Midland. And Houston? Who cares?

Look at him up there, trying to hide Phoenix. I suppose he thinks it’s a dry heat, that we’re used to those temperatures—that triple-digits in the desert aren’t newsworthy.

Well, I’m not going to take it anymore. Arizona deserves recognition of its hell-like conditions—its dust storms and yearlong droughts, its monsoons and raging haboobs and daytime temperatures hot enough to melt lead.

I put a call in to our local news station, demanding that they do something. They’re an ABC affiliate—surely they’d have some pull with this quack.

“I need to talk to your weathergirl.”

Did I stutter? “Yes, you guys have to do something about the weather report on GMA. It’s completely unfair.” Boy, I was really steamed.

“Umm, so you want to talk to one of our meteorologists? Which one?”

“Just a minute, sir.” Right before she put me on hold, I heard something like, Hey you guys, we got another one. I guess I wasn’t the only person who was mad at Sam Champion.

A few minutes later, a pleasant-sounding voice came on the phone. “Hello, this is Amber.”

Finally. “Are you a weathergirl?”

“Yes, I’m a meteorologist.” She seemed offended that I wasn’t using her official job title.

I explained to her how Sam Champion was snubbing Arizona, that he was giving those wimpy Texans all the weather attention. If it were up to Sam Champion, Arizona could burst into flames—he’d never say a word about us.

There was a long pause. “Well, these are the normal temperatures for Arizona at this time of year, sir.”

She interrupted. “And you have to realize they’re not used to these conditions in other parts of the country. I think that’s the point that Mr. Champion is trying to make.”

I couldn’t believe this. She was actually sticking up for him. “So you’re not going to do anything?”

“Yes?” There was a sick feeling in my stomach.

“Please don’t refer to  me and Sam as weatherpeople. We’re meteorologists.” And she hung up the phone.