Turn off the Light! 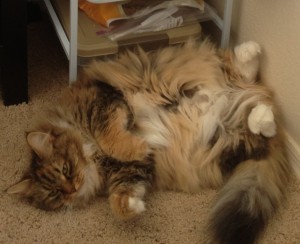 The Nordic Warrior Queen was hollering at me the other day. “Why can’t you men ever turn off the light when you leave the room?”

I was a bit offended at being lumped in with the rest of the male species. After all…it’s me she’s talking about, but I kept my opinion to myself; you don’t survive thirty years of marriage without knowing when to pick your battles.

I finished my turn in Chess with Friends and looked up, so I could understand her problem. “Hmmm? What’s that dear?”

“The bathroom light. You left it on.”

“That’s the Sister-Wife’s bathroom. I’m not allowed in there, remember?” (At least not when they’re home)

I knew she’d gone in there to pee not more than twenty minutes before. “So…why do you assume I did?”

Just then the phone rang – it was her mother, Judy-Wan Kenobie, calling from Florida. I figured it was a good time to leave, so I headed for my den, a place where I’ve been spending a lot of time since the cardinal died. On the way there, I went down the hallway and turned off the bathroom light.

Ten minutes later, she started hollering again. “You said you were going to turn off the light!”

Well, I never did say that, but I did turn off the light. “I did,” I yelled back.

I saved what I was working on and went out to the living room. In my calmest voice, I asked, “What, dear?”

“You said you were going to turn it off.”

She thought it was a question. “Yes, you did.” she insisted.

“I…oh, never mind.” It all seemed so complicated. I walked down the hall to the Sister Wife’s bathroom and…the light was on again. What the hell?

I turned it off and started for my den, avoiding the living room. But just as I was closing the door, I heard the snap of the light switch.

“What are you doing?” I said over the noise of the TV. She was busy watching The Chew.

“Dear, I’m not yelling. Why did you turn the light back on?”

She stood up and came around the corner to look at me. “Are you okay?” she asked. She had that look on her face, like I might be cracking up.

“What do you mean? Of course I’m okay. I just asked if you turned the light on.”

“No, I didn’t turn the light on.” She smiled condescendingly. “And if I had, I would have turned it off when I left the room.”

“I’m going shopping,” she said, and put on her shoes. “Please turn the light off before you go back to work, would you?”

Five minutes later, I heard the snick of the light switch. An icy fist of fear clenched at my belly. “Dear,” I called. “Are you home?”

No answer. I grabbed up my baseball bat from behind the door and walked slowly down the hall. Raising the bat over my head, I leaped around the doorframe, ready to hit a homerun on the intruder’s head.

But the bathroom was empty.

I turned off the light and started back. But just as I turned away, I heard a scratching sound, followed by a horrific odor, the stench of a bloodthirsty predator’s meaty droppings.

Holding my breath, I stepped back into the bathroom. And that’s when I saw it – the Übercat, climbing out of its catbox, where it had apparently just dropped a massive turd.

It looked up at me, a gleam in its feral eyes. Turn the light back on, would you? I don’t like pooping in the dark.

The Übercat nodded its head. Who’d you think it was? Dumbass.

“You can turn on lights?”

You humans. So arrogant. You think you’re the only species with mechanical ability?

I couldn’t believe this. Here I was talking to a stupid cat. My wife was right – I must be losing my mind.

In response, the Übercat gave me a Cheshire-like grin. I had to call someone, anyone.

You tell anyone, and I’ll make your life a living hell.

“What?” I couldn’t believe this. “How are you going to stop me?”

You’d better believe it. Listen, Jack. You’re living with two menopausal women. Who do you think they’re going to believe – a cute, furry innocent, housecat, or you, the one who got caught sticking me in a plastic bag?

Jesus, maybe it had a point. “Yeah, um, sorry about that. It seemed funny at the time.”

The Übercat glared at me like I was prey. Don’t let it happen again, asshole. And no more “accidentally” locking me in the pantry.

I turned the light back on, and went back to my den, closing the door firmly behind me. It was a little early for a beer, but I figured I had a good excuse. Outside my den, I could hear the Übercat, purring as it walked down the hallway.