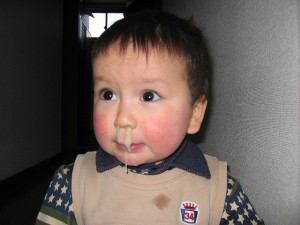 What’s up with you guys anyway? After two years and 300+ blog posts, what’s the one observation on this fine site that gets the most hits? Snot!

Where’s the fascination? It’s not even that funny – in terms of humor, it doesn’t compare to Ivan and the Key Card, or The Garden Hose. And yet it’s had over 1000 page views. I don’t get it.

But what is snot, anyway, that makes it so interesting? According to Wiki – who would still be offline were it not for my scathing condemnation of Barbara Boxer and her SOPA antics, thank you very much – gives the following definition:

“Nasal mucus is produced by the nasal mucosa, and mucal tissues lining the airways (trachea, bronchus, bronchioles) is produced by specialized airway epithelial cells (goblet cells) and submucosal glands. Small particles such as dust, particulate pollutants, and allergens, as well as infectious agents such as bacteria are caught in the viscous nasal or airway mucus and prevented from entering the system. This event along with the continual movement of the respiratory mucus layer toward the oropharynx, helps prevent foreign objects from entering the lungs during breathing. In addition, mucus aids in moisturizing the inhaled air and prevents tissues such as the nasal and airway epithelia from drying out. Nasal and airway mucus is produced continuously, with most of it swallowed unconsciously, even when it is dried.”

Wait a minute? You mean I’ve been swallowing that crap? And what are these goblin cells? Sounds scary, having goblins inside my nasal mucosa – what if they escape?

But why does anyone care? To me, snot is nothing more than that nasty goo that dries to a crust on the sleeve of some middle-school kid’s parka when he’s been out sledding too long, or the funky crap you find stuck to your pillow in the morning. It’s not worth talking about.

True, it’s fun to plug one side of your schnoz and blow a big wad of it into the nearest creosote bush, and there’s nothing better than hawking up that last green monster at the end of a long run of the flu. It’s the same kind of gratification as…popping a zit, perhaps, or picking a scab. Plucking a nose hair. It’s one of life’ s simple pleasures.

And here’s a little poem for you:

If you kiss your honey,
And her nose is runny,
Don’t think it’s honey,
‘Cause it’s not

Get it? Cause it s’not. Sadly, I can’t take credit for this gem – I found it on the Internet. But still – it goes to show people’s weird obsession with their bodily by-products. Humans are really sick sometimes.

So, 1013 page views of Snot? If I were paid a nickel for each visit…well, I might not be a millionaire, but I could certainly buy half a tank of gas and a triple-mocha latte at the Super Pumper, or maybe the Blue Ray trilogy of Back to the Future at Sam’s Club. So come on people – send me some nickels, and I’ll tell you everything you ever wanted to know about phlegm, mucus,  snot, boogers, loogies, nasal gems, snorters, trouser grout, snot rockets,  green slimeys, nose gold, tunica mucosa nasi…did I miss any?