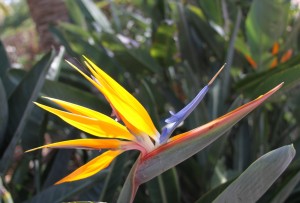 When I woke up this morning, I knew there was something special in store for me. Thursdays are good days for me anyway – they come with a certain feeling of accomplishment at having put away eighty percent of the workweek, but without all that giddy TGIF expectation that accompanies Friday. But today would be over the top. I just knew it.

Besides, it looked to be a beautiful February day in Irvine. I stood before the hotel room window, looking out at Orange County so clean and bright, with the commuter planes busily taking off from nearby John Wayne airport. Tomorrow I would be on one of those planes, making my way home after a week of successful training for my new job.

It was time to go. I showered and shaved, finished off the last of my coffee, and quickly got dressed, eager to start my day. I opened the door and started down the hallway, swerving around the stout Mexican housekeeper with her cart of cleaning supplies. As I passed, she glanced up, turned away, and then suddenly looked back at me with a warm grin. So she felt it too – today would be special. “Buen dia,” I said. Her dark eyes sparkled in response.

And in the lobby, several neatly dressed businesswomen gave me appreciative second looks before breaking into wide smiles. Boy, I’ve heard that clothes make the man, but these California women are sure aggressive, I thought. I even saw one of them nudging her girlfriend and pointing my way as I passed. Wow.

Even the men here are extremely friendly. As I stepped outside into cool morning air, the doorman greeted me with a smile. “Good morning, sir,” he said. “How are you today?” Before I could respond, his grin widened in unsuppressed mirth. “Just fine, thanks,” I said, figuring he must really like his job to be so happy. Whoever said Californians are rude?

But as I walked across the parking lot and headed to the street, I thought: why shouldn’t he be smiling? The day was pleasant; the sky a deep blue, the sidewalks lined with golden poppies and Birds of Paradise. From the west, the Santa Ana winds carried a hint of salt air from the Pacific. Beautiful.

It was just a short walk to the intersection, where I stood waiting for the flashing “Don’t Walk” sign to turn green, signaling it was safe to cross. As I waited, cars slowed, people waved, a few of them even honked. It dawned on me then that I really love California; the people here are so friendly. All eyes were on me as the traffic came to a courteous stop, and I made my way through the crosswalk and up the street to the office building where I work.

Once on the 16th floor, I made my way to the classroom, greeted my fellow students good morning, and set up my laptop before going to the cafeteria for some coffee. As I stepped out of the room, there was an excited hum of conversation behind me. I knew my classmates were glad to see me.

As I stepped into the cafeteria, I interrupted two salesmen discussing some big software deal. They stopped talking and gave me a quick glance. I nodded my head in greeting. They quietly resumed their conversation while I poured myself some coffee. As I walked back to class, I heard one of the salesmen braying laughter. Maybe the other one told him a good joke.

We were fifteen minutes into class before I stopped to consider – the smiling women, the honking cars and waving drivers, the chatter of my classmates, the backslapping salesmen. My feeling of good will, the certainty that it was going to be a great day – these suddenly evaporated like dew on the desert floor. Something was wrong.

And that’s when I looked down and realized the fly on my pants was open, and a bright white streamer of my dress shirt was dangling out there for the whole world to see.

Dozens of people saw it and nobody said a word. Those fucking Californians – I’m pretty sure some of them snapped quick photos with their iPhones, and I’ve almost certainly appeared on several hundred-thousand Facebook pages by now.

Previous Post
« Turn off the Light!
Next Post
Kicked in the Shin »
Mr. Ass
Calotropis Theme designed by itx