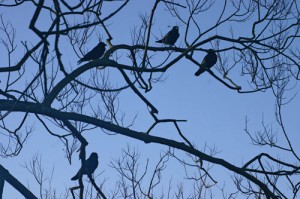 As he reached for the dashboard and switched on his bubble light, I realized the unmarked car had been following me ever since I left the bar. I swung into the nearest parking lot I could find, a Toys R’ Us store, jam-packed with mothers and their children returning unwanted Christmas gifts.

I put my hands on the steering wheel and waited; I didn’t want to risk getting shot.

As the cop approached my door, I had a sinking feeling – that military gait, the perfectly-pressed khakis, his hat cocked at a jaunty angle: it could only be one man. And sure enough, as he leaned into my window, the afternoon sun glinted off his polished name badge: ANDERSON

The last time I’d seen him was in San Diego, after I’d attempted to outrun the mechanical eye on a toll booth. Officer Anderson had caught me red-handed. And before that, he’d stopped my brother one snowy night in Minnesota, years and years ago. Officer Anderson and the Hansons went way back.

But what was he doing here, in Arizona?

I reached slowly, carefully, for the glove compartment, gently extracting the vehicle registration. Together with my driver’s license, I handed it out the window.

“Stay here,” he warned, and strode back to his patrol car.

Within minutes, he returned. “So, we meet again, Mr. Hanson. Would you step out of the car please?”

“Hello, Officer Anderson.” What else could I say?

“Have you been drinking, Mr. Hanson?”

“Well, not really.” I was screwed.

“I had two Two Turtle Doves.”

“No! No, wait. What about a sobriety test?” I knew I was fine to drive.

“I’m taking no chances. I let one Hanson slip through already. It won’t happen again.”

“Two Two Turtle Doves? What kind of nonsense is that? And what’s that sitting in your back seat – Three French Hens?”

“Okay, that’s it. Up against the car.” He put his hand on his service revolver.

Just then a second squad car pulled up. “What’s going on here, Duane?”

“Anderson, how many times have we told you? You’re out of your jurisdiction.”

“Go back to San Diego, Duane. And stay there.” The cop looked at me. “You’re free to leave, sir. Sorry for the inconvenience.”

As I got into my car and pulled away, I could see Officer Anderson in my rearview, glaring at me. I’d better be careful the next time I go to San Diego.

I arrived home five minutes later. Shaken from my near incarceration, I quickly cracked open the growler and poured some Three French Hens. It was even better than Two Turtle Doves. It was so good, in fact, that within an hour or two I’d finished the entire half-gallon. I managed to stay awake until eight o’clock, then went to bed and had terrible dreams of Officer Anderson.

I awoke early the next morning to the sound of crows, cawing incessantly. Pale sunlight filtered through the blinds. My head throbbed from the after-effects of the Two Turtle Doves and Three French Hens. I rolled out of bed and dragged myself to the window to see four crows perched on a nearby Palo Verde tree.

No more Turtle Doves or French Hens for me, I vowed. Never again. Outside, the four birds continued their calling. Caw, caw.