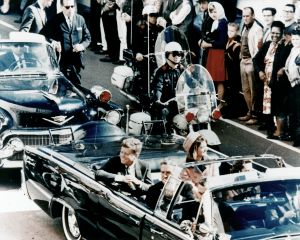 The Nordic Warrior Queen says I’m a procrastinator. That’s when I tell her I’d rather talk about it later.

Actually, I think procrastination is a virtue. After all, why waste valuable time today doing what’s best put off until later? After all, you might wake up dead tomorrow.

Look at all the things that would have turned out better if people had only procrastinated. If NASA had held off a few hours on the Space Shuttle Challenger launch, the air would have warmed up and the o-rings might have held and Christa McAuliffe would still be teaching Social Studies.

If Adolf Hitler had decided to wait until the next Spring before attacking the Soviet Union, we might all be speaking German. Okay, maybe that’s not a good example. Umm…if Admiral Yamamoto had held off on attacking Pearl Harbor until Roosevelt read the message from Tokyo, the US fleet might have had time to prepare a defense, saving thousands of lives.

And if JFK had decided at the last minute that he would ride through Dealey Plaza on Saturday instead of Friday (he was the President after all, he could have given that order if he’d wanted to) then…well, most everything would be different. Who knows?

Despite all this pro-procrastination evidence, my wife’s a nut for getting things done on time. She had her Christmas shopping done in July. The dog eats precisely at seven o’clock every morning. She hasn’t sent a belated birthday card in her life. In fact, belated isn’t even in her vocabulary. It drives me crazy.

I agree, some things can’t be put off. Happy Hour, for example; if you’re late for that, it’ll cost you a bundle. Getting to the movie theatre early is important, otherwise you could end up sitting next to a 400-pound mouth-breather with body odor. And taking the motorcycle out in the afternoon – if you wait too long, you might get cold, especially at this time of year.

But these silly household chores and honey-dos? Seriously. Does it really matter if I vacuum this afternoon, or tomorrow? The trash might as well wait until the bag is really full. Laundry? I have clean t-shirts in the closet, and I know these jeans can go another day. The president’s not coming for a visit, you know.

She doesn’t much like it when I say that.

Still, I try to make her happy, and get most of my stuff done on time. Really, I do. Which is why, last night, I give her that look, the one that says “How about it, honey? Let’s make a little magic.”

She smiled. “We can always do that later,” she said, and rolled over. “Go to sleep.”