Cindy and the Hounds 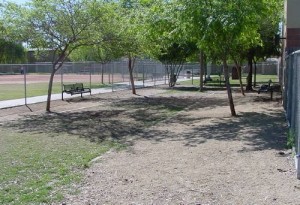 I asked the Nordic Warrior Queen, “Whose fucking mutt is that? I’m going to kill it.” That’s when she told me there’s a dog park a few hundred away; just next to the baseball field, on the other side of the trees.

A dog park? You mean, a park, just for dogs? What the hell? You’d think they pay taxes or something. So I Googled “dog parks,” and it turns out there are over thirty of them in Arizona alone. Do the math and that means…what, a couple thousand across the US? That’s more parks than there are for inner-city kids.

There’s even a web-site. You guessed it: www.dogpark.com

These mutts have 2/3rds of an acre, with a large shaded area, doggy fountains, and “a push button dust control feature that waters the area to keep the dust down.” Wow.

So why are they barking all the time? You’d think they would just…chill. But no, every day it’s the same old thing. Non-stop barking. What are they going on about? The evil side of me was thinking shock collars and antifreeze.

For the owners, that is.

I love dogs. I’ve had dogs for most of my life. But this dog park thing seems a little over the top to me. I mean, why does a dog need a park? When I was a kid, the whole neighborhood was a dog park. There were dogs running everywhere. Of course, it didn’t always turn out too well for the dogs.

On several occasions, disgruntled neighbors, tired of picking up poop, repairing dug-up begonias, and having their kids chased home from school, would complain to the cops and off went Fido to the pound. When this happened in our house, my Dad would post bail, and then I would go the entire summer without allowance.

If calling the cops didn’t work, sometimes those same neighbors took matters into their own hands. Two of my dogs were poisoned, one was shot, and another lost his hind foot in a fox trap.

So maybe the whole dog park thing is a good idea. But why do they have to bark…all…day…long?

I decided to go down there. Maybe I could talk some sense into them.

The first thing I noticed was the smell. Jesus. It’s no wonder those dogs were mad. The place smelled like…well, a dog park. There was poop everywhere. Between the fairy rings surrounding the mounds of dried-out dog crap and the urine-burned patches of turf, the grass of this place would never qualify for the Phoenix Open. Not in a million years.

There were dogs humping and fighting, running, sleeping, squatting, and pissing. There was enough marked territory in that 2/3 acre to cover everything west of the Missisippi. There were yappy Chihuahuas, mangy crossbreeds, fuzzy Malteses, Papillons, and Shih Tzus, embarrassed-looking weiner dogs, and even a pony-sized Great Dane with the unlikely name of Fifi.

And the minute I opened the squeaky latch and stepped inside the chained-link confines of that doggy heaven, every eye in the place turned my way. They were scrutinizing me, looking for weaknesses. I felt like a rabbit on the race track, a gazelle on the African savannah, a tired swimmer a few strokes in front of the Great White. I was screwed.

Before the hounds could attack, however, this great horse of a woman came over. I guess she was the caretaker. “Hi. I’m Cindy. Can I help you?” she said. She might have stood six-foot three, and outweighed me by a hundred pounds at least.

“Umm…yes. I was wondering. Is there any way to get all these, er…damn dogs, to shut the hell up. For a little while, at least. I’m trying to work.”

Cindy pulled an attitude. “This is the DOG PARK, Mister. Didn’t you see the sign?” Around me, the pack was closing in, surrounding me.

“Yeah, but…I live right over there, and the dogs, they bark, bark, bark, all day long. Can’t you make them stop?” A huge German Shepherd was nosing at my shoe.

“Why would I want to? They have a right to express themselves. Don’t they?”

“Well, uh…” I could feel Fifi’s hot breath on my thigh; a pair of ferocious-looking pugs were circling me, killers ready to attack. With one word, Cindy could turn me into dog food. “Maybe you’re right. Dogs have rights too.” I began to back away, slowly, slowly, hoping to reach the safety of the gate before she unleashed the hounds.

Cindy and the pack watched me go, warm slobber dripping from their flappy jowels. As I closed the gate and turned for home, defeated, Cindy called out. “Have a nice day, sir.”

Behind me, the dogs began to bark.