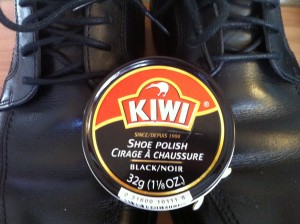 I had one of those business appointments where you’re not supposed to wear jeans and a t-shirt. I hate wearing a tie. Still though, I looked pretty good, at least for an old machinist. Until you looked down, that is.

I was in desperate need of a shoeshine. My shoes looked like crap.

There was a problem, however; sometime during the last couple of moves, I seem to have misplaced the shoepolish. That, or the Nordic Warrior Queen threw it out. She thinks I’m a packrat, so she chucks anything that won’t be needed in the next couple of weeks. More on that later.

So off to Walmart we went. They carry a huge selection of shoe care products, all at Every Day Low Prices.

The Nordic Warrior Queen wanted me to buy one of those newfangled, All-in-One bottles of polish, with the built-in applicator sponge and the little brush in the cap. Screw that.

I like the old-fashioned cans of Kiwi. The ones with the picture of the skinny-headed bird on the top and the little mechanical swivel latch on the side. I like the way the lid goes POP when you turn it, and the faint chemical smell of the wax inside. It’s like being in a shoe store.

My Dad had an old shoebox when I was a kid, a big wooden affair with a built-in footrest on top and a sturdy clasp to keep its contents secure. He kept it in the closet, next to his stash of Playboys. The inside was chock full of stiff rags and splayed brushes and clanking cans of dried-out shoe polish. I used to pull that old box out once or twice each week just to smell the Kiwi, and to reorganize the cans. I might have sneaked a look at the Playboys now and then as well.

When we got home from Walmart, I popped open that new can of Kiwi and took a deep whiff. Time to shine the shoes. But how? I forgot to buy a rag with which to apply the wax.

Before she could start in with the “I told you so’s” about not buying the All-in-One bottle of Kiwi shoe polish, the one with the built in applicator and the little brush in the lid, I rummaged through my sock drawer. There were plenty of socks in there – who cares if I now have an odd number? And just so I didn’t hear any crap about wasting a sock, I grabbed one with a hole in the toe. It was ready for the trash anyway.

Want some advice? Never shine your shoes using a sock with a hole in the toe. I was halfway through the second shoe by the time I realized there was black shit everywhere. It was on the counter, on the floor, on my shirt and pants, even on the door of the refrigerator (must have been the beer I grabbed – shoe-shining is thirsty work). I guess I rubbed my face at some point because now I looked like I could do a bit in a minstrel show.

Want to know what else? Kiwi Black doesn’t come off. Ever. Which doesn’t make any sense, because it certainly comes off your shoes, otherwise you’d never have to polish them, right?

Anyway, I still like the smell, even though I ruined my favorite t-shirt and my fingernails are still black. At least my shoes look good.