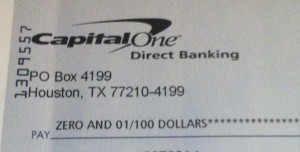 My birthday was last month. Oh, you missed it? That’s okay, belated birthday gifts are always welcome. But it got me thinking: the next one is my fiftieth. The Big Five-OH. So I figured it was time to open a savings account.Retirement is only a few years away, right?

I had a few bucks saved up, but where to put it? Under my mattress was just giving me a backache, but the fucking banks are only offering .01%, or less.

But then I saw the ad on the Internet: Capital One Internet savings accounts at 1% interest rate. One hundred times the Scrooges down the street. Good deal. Besides, I like their commercials.

So I opened an account and deposited $200. I was on my way to financial independence. The Nordic Warrior Queen said I was crazy. How can you open a savings account, actually give money, to a bank you can’t actually see, that doesn’t have a front lobby where you can walk in and get free coffee and balloons?

I explained to her that she was wrong, that she’s guilty of faulty thinking. Get with the 90’s, for Chris’sake.

I spent the night on the couch.

As the weeks went by, I eagerly watched my bank statement. I couldn’t wait to see my ROI. That means “Return On Investment” for all you non-investor types.

But six weeks later and still nothing. What the hell?

Finally I called them. I waded through the seven levels of automated phone system hell – you know, “Press one for English, apriete dos para Español “ and then when you finally get a human being they “accidentally” hang up on you and you have to start all over.

But I finally got hold of Roberto, who was sorry to hear I was having problems but would be happy to investigate, whereupon he put me on hold, forcing me to listen to six-point-three minutes of B.J. Thomas, Neil Diamond, The Bee Gees, and half of an old Carpenters’ song.

“Yes, Meester Kip?” I could tell he was all business.

“Meester Kip. I regret to inform you that you have not reached the minimum deposit required for the Capital One special Internet-only one-percent interest rate.”

“Okay. How much is that?” I could afford to throw in a few more bucks.

Roberto was quite apologetic, but pointed out that I should have read the fine print, at the bottom of page 7, which I had agreed to and electronically signed.

Last week I received this check from Capital One. I’ve since framed it. It’s for my earned interest of…one penny. I’m going to keep it for all eternity. I’m hoping that, by my not ever cashing it, that it will break some cog in the financial machinery, that they will never be able to reconcile their books and will come to utter ruin.

Probably not, but it’s worth a try.