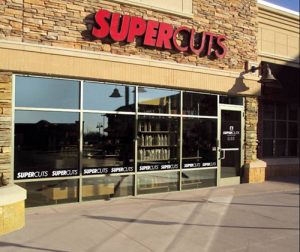 I think all this dressing up for Halloween is silly. What’s the point, after all? Everyone knows there are no witches and goblins, no werewolves or vampires or ghosts. Still, the free candy is something I look forward to, so I play along. Just to be a good sport. Some people say I’m a little old for trick-or-treating, but it’s only once a year, so what’s the big deal?

So yesterday afternoon, during a trial run of my costume, I was having a difficult time fitting my hair under the zombie mask. At my age I don’t have all that much hair to worry about, but I still wanted to look authentic, and figured I should get a quick haircut before the trick or treating got started.

I jumped in the car and headed up to the local Supercuts. Luckily, there wasn’t a line – in fact, the place was dead. I assumed everyone was home preparing for Halloween, but now? I’m not so sure. About the only I’m sure of now is this: I’m never going back.

I must have stood there ringing the bell for ten minutes before the girl finally came out of the back room. I’m normally a patient person, but I was a bit angry by then. The moment I saw her though, I forgot all about her keeping me waiting. Holy cow, what a sight!

She stood maybe five-feet, eight inches tall, but with her stiletto heels and teased blonde hair, she easily came to six-foot two. Black-lace leggings and a tightly fitting camisole stood in sharp contrast to her pale, nearly bone-white skin. With those dark circles around her doll-like eyes, the sharp canine teeth and blood-red nail polish, she could have easily won first prize in any vampire costume contest. There was even a pair of amazingly realistic bite marks in her slender neck, complete with a little dried blood for effect. What a getup.

“Hello,” she said, with a strange, European-sounding accent. “My name is Camelia. I am sorry to keep you waiting. I had to take care of someone…I mean, something in back. How can I help you?” Her voice was silk.

“Of course. Right this way,” she said, and turned away.

Once in the chair, I tried to make small talk. “Nice costume,” I said. “But I didn’t think vampires had reflections.” She stared at me in the mirror without replying, her face deadpan. After a few awkward moments of silence, I told her how to cut my hair. “Nothing fancy,” I said. “Just trim the sides and a little off the top.” I was suddenly in a hurry.

We were the only ones in there.

She had the clipper buzzing up the back of my head when she suddenly spoke. “That is a common misconception in the West.”

“I…I’m sorry?” What was she talking about?

“Yes, where I come from, everyone knows this.”

I had to be polite, so I asked the only logical question under the circumstances. “Where do you come from, ah…Camelia?”

“Why, from Romania of course. What was once ancient Transylvania. My parents moved me here to these United States when I was but a young girl.”

“Are they vampires too?” This chick was a real whack case.

She laughed and shook her head. “You silly mortal. Of course not.” Her spiky blonde hair shone in the afternoon sun. “That would be quite impossible.”

“I see. And what about daylight,” I asked, growing increasingly uncomfortable with her strange behavior, but playing along long enough for her to finish the haircut. I had to get out of there. “How is it that you’re out during the day?”

“Another misconception. Of course vampires can tolerate sunlight, yet it has no effect on them. Hence my pale skin.” She smiled, “How would you like the back? Square or rounded?”

Done for the moment with the trimmer, she reached for the scissors and proceeded to cut the top. She began to sing some strange song under her breath. She leaned in close to me and I noticed she had an earthy smell, almost like freshly turned dirt. “Big plans for Halloween?” she murmured, and that’s when it happened.

Just as she was finishing the top, I watched in horror as the scissors cut deep into her finger. She didn’t even flinch… AND THERE WAS NO BLOOD.

“No, uh no,” I gasped. “Just staying home, handing out candy to the kids and all that.”

“Almost done,” she said, and reached again for the electric trimmer.

“Are you sure?” she said. The tone in her voice told me that she knew, yes, she knew that I’d seen her cut her finger, had seen that there wasn’t a single drop of blood. Everything she’d told me was true: she was a vampire. “Are you sure you can’t stay longer? I just need a little more of your time, is all,” and she smiled, her sharp teeth glinting under the fluorescent lights. Outside, it was nearly dark.

I jumped up and ran for the door, throwing a twenty on the counter as I went. “Thanks, Camelia,” I yelled. “Happy Halloween.” I could hear her laughing behind me as I fumbled with the car keys and scrambled inside, locking the door behind me.