Topping it All Off 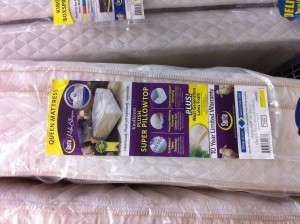 The Nordic Warrior Queen is getting up in age and has started to feel the aches and pains of her approaching fifties. Her neck and back hurts, and she blames the bed. I told her she just needs to get her feet up in the air more often but she’s not buying it. So after much discussion, we decided to get a new mattress (to see where the old one went, read “Chasing the Sonata”).

First off, I think the people who run mattress companies are a bunch of crooks. You can spend a fortune on what amounts to nothing more than a giant Kotex. And two years after you buy it, that old mattress is obsolete and you deserve this brand new bed, the one that’s going to change your life. After all, you spend one-third of your life in bed (and hopefully a lot more, wink, wink), so you need a comfortable mattress, right?

And in the end, what choice do you have? Everyone needs a place to sleep.

So she took the Sister-Wife out bed shopping. I wanted as little to do with the whole affair as possible. Those salesguys, with all their high-falutin theories on bed construction, and proper alignment, sleep modes and comfort systems. Whatever.

And all that bed testing. Rolling around on previously laid upon mattresses – it’s tedious at best, and seems to me a little too much like sharing a condom with a stranger.

But she finally decided on a Tempurpedic, which at least is more like a huge kitchen sponge than a Kotex.  They told her it was the same bed that Oprah sleeps on, so one could safely assume it has to be good, right?

We gave it a fair shot. The fucking thing cost $4000, so we basically had to. Eight weeks we slept on it. Sorry, Oprah, but we sent it back. I’m still waiting for the refund check. It should come any day now.

We looked at other beds. Posturpedics and Beautyrests, Sleep Numbers, iComforts, Perfect Sleepers, and ComforPedics. We tried Pillowtops, Firm, Extra Firm, Sort of Firm, Plush, Ultra, and Euro Top. I now know enough about beds to be the CEO of Serta.

After two weeks of lying in more beds than Heidi Fleiss, we finally said screw it and went back to basics. Sort of.

Why not build our own bed?

We started with a basic mattress. No fancy Smart-latex foam cores, nor individually-wrapped Titanium coils, patented Edge Systems, and Flameguard Rayon fiber Hypersoft covers. Just the same plain old mattress most of us grew up on.

And then, I supercharged it. Three inches of Talalay latex, two inches of NASA-approved high-density memory foam, three inches of free-range goose down, and a cover for each layer. Top that with 880-thread count Egyptian sheets and we were on our way to dreamland.

There was a small problem, however. After unwrapping the $700 worth of foam, latex, and fiber products, we were getting a little woozy from all the weird chemical smells coming from the visco-elastic polyurethanes, so we decided to open the windows and run down to the local pub for a couple beers until the smell cleared. Besides, we wanted to celebrate what would surely be the best night of sleep in our lives.

Unfortunately, we neglected to close the bedroom door before we left. Why would we? We’ve never had a problem with the dog before. What we didn’t anticipate was that the cute, adorable little toy poodle who my wife affectionately calls Annabelle Marie would think that digging several dozen holes in a $300 piece of latex would be so much fun.

We came home to enough bits of white shit floating through the air to cover the North Pole, and a dog that looked like a miniature Abominable Snowman. I didn’t quite kill her, but I admit she hides in the closet quite often.

It now takes me an hour to make the bed and we had to buy different sheets, ones deep enough to cover a circus tent, but at least her aches and pains are better. I have to consider it a success.

Now the only problem is my back. The damned bed’s too soft. Know anyone that wants to buy some slightly damaged latex?