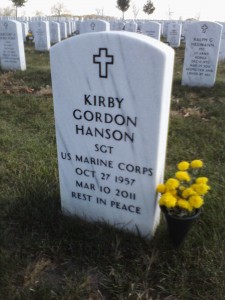 I have a book at home. It sits on the bottom shelf, the pages are dusty, the cover torn; I haven’t read it for years. The title is “A Place in the Woods” by Helen Hoover, and tells the story of a married couple who one day decide to dump everything and flee suburban life for a fresh start in the woods of northern Minnesota.

My brother gave me the book for Christmas when I was nine or ten, in that brief period of fragile recovery we shared after the loss of our older brother.

Sometimes I notice the book sitting there on that shelf, nestled in among all the much newer books, one of many and yet somehow alone, and I get a mental picture of the day Kirby, as a long-haired teenager, wandered the aisles of the local B. Dalton Bookstore until he found that particular book, picked it up and flipped over a few pages, and carried it up front to the cashier.

That day was forty years ago.

I’m not sure why he chose that one; perhaps it was because it carried a message of struggle, of starting over after loss. Maybe he liked the heft of it, or enjoyed the illustrations. At this point, I’ll never know.

Scrawled inside the front cover, in a much younger version of the handwriting that was so distinctly Kirby’s, reads the inscription, “To Kip, my brother whom I lived with.”

Life with my brother was, I suppose, not so different from what many people experience while growing up. We fought, we laughed, we were bored. One November afternoon, he pushed me into the freezing water of the creek behind our house; I came home from the hospital two weeks later and we laughed, jumping on the bed, at least until I fell and cracked my head on the wall.

Up to the time I finally learned to avoid him, Kirby would frequently hang me from any handy doorknob by my underwear, give me Indian burns and titty twisters until my skin was red, pound my head with his knuckles until I cried.

He donned silver ski-masks or rubber gorilla masks and hid in the basement with the lights out, waiting for me to come downstairs and reach for the switch.

My lingering fear of werewolves stems from life with my brother, as well as the still certain knowledge that cold hands will suddenly grab my ankles as I climb into bed at night.

And yet, on a weekend camping trip with our Dad to Goose Island, I barfed in his sleeping bag after eating one too many hotdogs. I put rubber dog turds in his bed, lit his pants on fire while he was still wearing them, and pestered him whenever his girlfriend was around.

In short, I got even, and certainly deserved at least some of the pain he inflicted.

Still, he taught me how to make gunpowder and launch hot coals from the grill into the trees along Nine Mile Creek and construct homemade dart launchers from pencil erasers and cardboard coat-hanger tubes. We watched Monty Python in our bedroom, and listened to the Jimmy Hendrix and King Crimson records our brother had left behind.

When Kirby left for the Marine Corps, I was only twelve; he knew how bad I felt about the whole thing, so he gave me his gold ten-speed to take care of while he was away. That bike was fast, with racing wheels and speedy gears and a super light frame; over the next few years, it took me everywhere, and carried me away from the gradual dissolution of my family. And when he finally came back from the Corps, Kirby took his bike back, but said nothing about the now bald tires, the broken kickstand, or the big scrape down the side.

Later, he helped me to pick out my first car, a red ’62 Corvair, for which I paid $400: he assured me it was a good deal. It broke down ten minutes out of the lot. But we towed it back to the apartment building and took the thing apart, and within a few days had replaced the carburetor, the spark plugs, fuel and air filters, despite the stern warnings of the landlord against car repair in the parking lot.

On my wedding day, Kirby was my best man, and dressed in his only suit helped me to fix my car after it broke down on the way to the church. We made it with minutes to spare.

Kirby and I worked together at a machine shop in Bloomington, and again in Chaska; he drove me crazy. He had this obsession to automate everything, and spent endless time rigging the machines to run faster. And he was always screwing around. One time he sent a bottle rocket flying under the bathroom door as I sat on the toilet, and later placed a garter snake in my desk drawer. I screamed like a little girl. To get even, I put grease on the rim of his safety glasses, and glued his toolbox shut. And then one night I drove to his house and painted yellow smiley faces on the hubcaps of his truck.

When I left him on that last day, just a few short months ago, I reached over and gave him a hug, kissing him on the cheek. I remember there was a fresh clean smell to him, like that of a new baby. He looked up at me and said that he would be better soon. He was right. To Kirby, my brother whom I lived with, I will miss you.

See you around, bro.