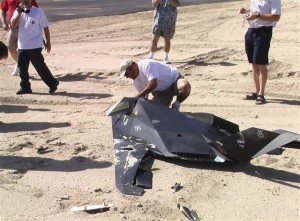 I took the Nighthawk out into the desert, well away from the sneering grin of The Stallion and his covey of fellow grocery handlers. I practiced mornings, nights, and weekends. The Nighthawk was a little hard to handle at first, but I kept her close to the ground, her mighty engines throttled back enough such that any mishaps would not be fatal ones.

Within weeks, I was ready to face The Stallion and his smug, condescending tone.

I unveiled the Nighthawk during the middle of the Arizona Airmasters’ monthly contest. The grand prize was a vintage set of Star Wars collectibles. There were dozens of planes there, all lined up alongside the neatly packed gravel runway like Army planes before Pearl Harbor.  All eyes were on me as I throttled up the twin jet turbines of the F-117 Nighthawk, the roar of their awesome power echoing across the field.

With a masterful technique I quickly brought the Nighthawk to cruising altitude, then began a gut-wrenching series of aerial maneuvers, twisting the controller like a Ninja master as I swung the Nighthawk through barrel-rolls, Immelmann turns, outside loops, and full-rudder stalls. Even over the deafening pulse of the Nighthawk’s engines I could hear the excited chatter of the Arizona Airmasters, and see them pointing as my aircraft gyrated through the summer air.

All except for Bob Bartman, that is: The Stallion simply glared at me, refusing to acknowledge my mastery of the sky. It was time for the grand finale.

With an evil grin, I pushed the Nighthawk into a double snap-roll, then immediately pulled her nose straight up. Higher and higher she climbed, her sleek ebony form growing smaller and smaller before finally disappearing into the flawless blue sky.

And that’s when I made my move.

The Lomcevak maneuver is arguably the most difficult of all aerial stunts, but I’d practiced it repeatedly until my control was perfect. Full right rudder, full right aileron, full down elevator and down she tumbled, a black nightmare plummeting out of control until just seconds before impact and I neutralized the controls, pulling the mighty Nighthawk into a tight four-point roll and up into a perfect Cuban-8, right over the astonished face of Bob Bartman.

The Arizona Airmasters cheered. I was suddenly surrounded by a mob of excited RC enthusiasts, all asking me to do it again. Even The Stallion came over and clapped me on the back. “Show us how you did that, Hawk.” He called me Hawk!

I happily obliged my fellow Arizona Airmasters, sending the Nighthawk high into the sky once more. And it wasn’t until I’d snapped out of the dive and begun executing the final turn into a reverse barrel roll that I realized I’d been flying the aircraft for 11 minutes.

The fuel tank on the F-117 carries enough fuel for precisely 10 minutes of flight, with a 30-second emergency reserve.

In horror, I watched as first one and then the other of the Nighthawk’s twin turbines guttered and went out. With an eerie majesty, the once mighty predator of the skies turned turtle and plummeted to the ground. In a shriek of breaking plastic, she bounced once, twice, then cartwheeled across the field and directly into Bob “The Stallion” Bartman’s vintage P-51 Mustang.

The fuel tank on the P-51 immediately ruptured and caught fire, spraying burning fuel across the field and lighting up the adjacent planes like a string of firecrackers.

In the middle of it all sat the grinning Sir Ackley, trapped among the burning wreckage. Like any good Brit, he went down with his ship.

After the fire department left, I collected the few smoldering bits of fuselage which remained of the once proud Nighthawk. As I turned to leave, Bob looked over at me with hatred in his eyes. “You can’t be in our club,” he said, and burst into tears.