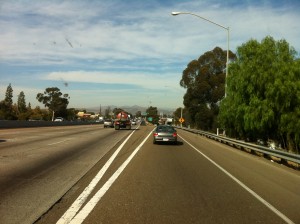 When the Captain asked if I could help bring his old mattress to his parent’s house, of course I agreed. It turns out the Homeless Lady was tired of sleeping on the futon, and since Jamie and the Captain had just upgraded to a King-size mattress (Jamie, like her mother the Nordic Warrior Queen, is a bed hog), it only made sense to donate the thing to a worthy cause.

So we loaded it up in the back of a big white rental truck and headed across town to the Homeless Lady’s house. I was following the Captain, who was driving his hopped-up Hyundai Sonata at speeds exceeding ninety miles per hour. I guess he figured we were so close to Tijuana that there’d be less chance of being shot at by angry Mexicans if we were driving at near light speed.

After several near-death collisions, I was mentally reviewing my insurance policy and wondering if I shouldn’t have increased coverage before leaving the house when we finally pulled off the freeway, headed towards the boyhood home of the Captain, deep in the domestic underbelly of suburban San Diego.

At the first stop sign, I was nearly t-boned by a vocal young lady who was absent the day they taught turn-signal use in high school. A few blocks later a Ho Chi Minh-type character approached the rental truck and asked me for five dollars. Boy, even the panhandlers are expensive in California. I nearly killed a Greg Brady look-alike when he swerved in front of me on his skateboard, and was followed for several miles by a number of aging Hells Angels.

We eventually arrived at our destination, however, and successfully completed the installation of the Homeless Lady’s new bed. She’s so pleased to be sleeping on a real bed we’ve been invited for dinner tonight. I think we’re having broccoli and Brussels sprouts, but I don’t mind; I’m just happy to have survived the trip.