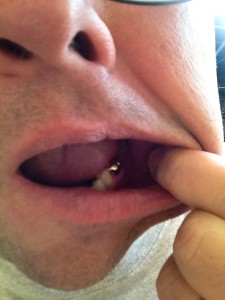 I’m not a big candy lover. I admit to a fondness for Butterfingers, and the occasional bag of peanut M&Ms, but I watch my weight. It mostly just goes up.

My weakness is Sour Patch Kids. I keep a jar of them in my office. The Nordic Warrior Queen always eats the red ones. Whenever she comes upstairs, I hear her behind me, unscrewing the metal lid. That’s the only way I know she’s back there. She’s sneaky like that.

She opens the jar and pushes all the green, yellow, and orange Sour Patch Kids aside, like fat kids at an orphanage that nobody wants to play with.

I tell her no, but she ignores me. “Mmmmfffghghhhh,” she says, and smiles, her teeth full of red goo. She looks like a half-assed vampire when she does that.

The red ones are cherry flavored. They’re my favorite. Because I love her, however, she gets to eat all of them, and there’s nothing I can do about it.

Last Friday she refilled the jar. The minute she went downstairs, I picked out all the red ones and shoved them in my mouth. Then I went to the bathroom and practiced smiling like a vampire. I was going to scare her when she came back upstairs, to teach her a lesson for eating all the cherry Sour Patch Kids.

I tried for an especially wicked grin and CRUNCH! Something broke in my mouth. I could feel it in there, rolling around like a boulder. My mouth was so full of half-chewed Sour Patch Kids that I almost swallowed it. I spat a huge wad of red jam into the sink, and after a few minutes of digging around I found it. My gold crown.

Crap. I paid fifteen hundred bucks for that thing. I gave it a quick rinse and showed it to the Nordic Warrior Queen.

She looked vindicated. “That’s what you get for eating the red ones, ” she said, then dialed the dentist’s office. “They can get you in on Monday.”

“Chew on the other side.” She didn’t seem very sympathetic.

The crown was still full of cherry-colored goo, so I started to wash it off. “You’d better leave it alone.”

I shoved the crown into my dresser drawer, where it rolled around all weekend, collecting dirt and lint and bits of fuzz. When I pulled it out on Monday, it looked like something the Ubercat had puked up. The Sour Patch Kids had dried like red concrete.

Ignoring the Nordic Warrior Queen’s warnings, I took the gold crown to the bathroom and scrubbed it with a toothbrush. I didn’t want any guff from the dentist about eating candy. I’d been hearing that all my life.

I was in a hurry and I dropped it. It bounced around the sink three times and tumbled down the drain. I had to go downstairs for a monkey wrench.

She looked up from the TV as I stomped through the living room. “Where are you going?”

“I have to check something in the garage. Never mind.”

I pulled the monkey wrench from my toolbox and slid it into my back pocket, then covered it with my shirt so she wouldn’t see. I ran back upstairs, got the drain trap unscrewed, and extracted the crown from a slimy mass of hair and toothpaste.

Shit. No time to clean it now. I arrived at the dentist office at 8:39. When I showed him the Ziploc bag with my fifteen-hundred dollar crown swimming in a stew of hair and pink-tinged drain water, he asked what happened.

He looked skeptical, and took the Ziploc bag.

The technician came in and set out the instruments of torture. Shortly afterwards, the dentist returned. “How’d you say you lost the crown?”

“Hmmm. I only ask because there was some gooey red stuff stuck in the corners. Looks to me like Sour Patch Kids.”

“You shouldn’t eat those things, you know. They’re hell on dental work.”

He raised his eyebrows, giving me the same look Dr. Szell gave to Dustin Hoffman in Marathon Man, right before he drilled a hole in his tooth.

They charged me seventy-five bucks for a “cleaning fee” to remove all the hair, lint, and hardened Sour Patch Kids from the crown, and another hundred for an emergency visit, even though it was during normal business hours. It took him thirty seconds to glue the crown back in place.

I guess I’ll let the Nordic Warrior Queen eat all the red ones from now on. In fact, she can have all of the colors. My Sour Patch Kids days are over.