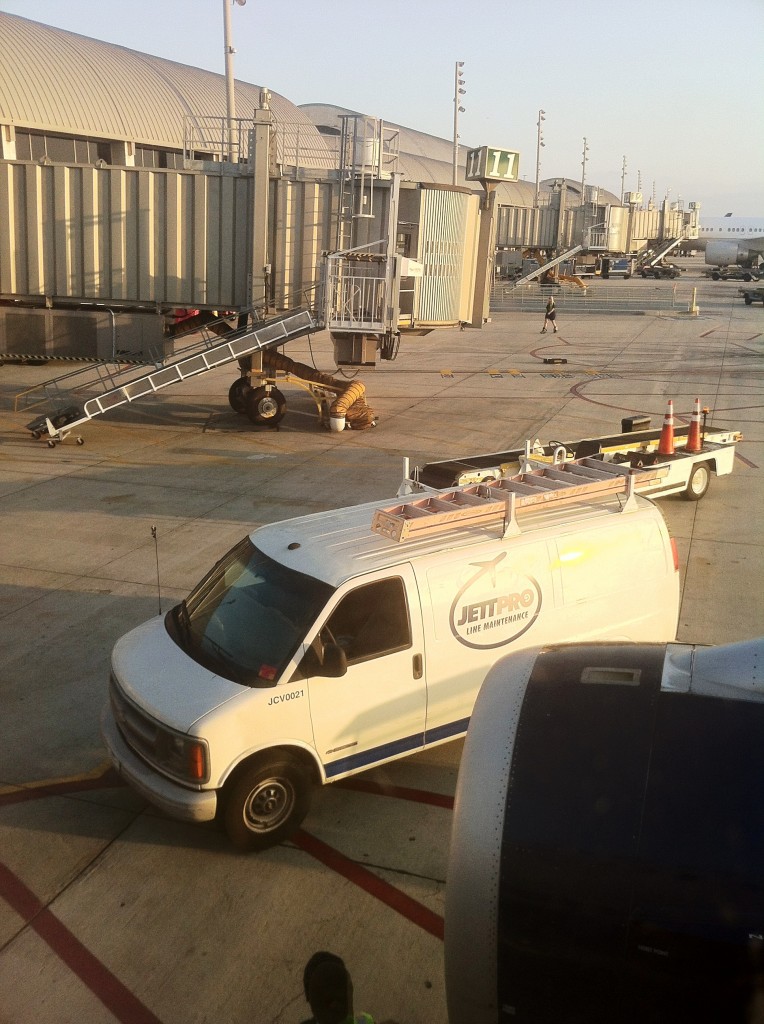 Stranded on the tarmac at John Wayne International, I wondered what that airport’s namesake would have thought of the situation: the cabin was so hot the seatbacks were beginning to smoke, the stewardess was a humorless cross-dresser named Georgina—when I made a perfectly reasonable request for some peanuts and a beer to pass the time, she actually snarled at me—and it appeared that we were going nowhere, probably for a very long time. We had a busted airplane.

John Wayne, playing as Rooster Cogburn, might have said, “Well, now, sister, just what the hell can I do about it?”

Captain Phillip “Flip” Shoemaker had just come on the intercom to explain how the starboard engine (that’s the one on the right) was “acting funny.”

“But never fear,” said Flip (he actually said this). “The mechanics are on the way. We’ll be underway shortly.”

What was I expecting—a fleet of bright, shiny, uniformed technicians with US Airways insignia on their sleeves to roll in and service our jet aircraft using high-tech hand tools and NASA-quality diagnostic equipment?

We got a young man in dirty coveralls from JettPro Line Maintenance.

I sat there in seat 17F and watched as the technician parked his late-model Chevy van alongside the airplane. I saw him unload a decidedly low-tech fiberglass stepladder—the same model and color as the one in my garage—strap on a toolbelt, then climb up and unlatch the engine cowling.

I then observed the would-be jet aircraft repairman scratch his head in ponderous consideration before applying a long, Phillips-head screwdriver to the ultra-precise inner workings of that General Electric turbofan engine.

A screwdriver? Back in my machine shop days, I’d actually made a lot of the same components used on that airplane—I knew you shouldn’t use a screwdriver on them. I’d repaired dozens of machine tools over the years, and assembled countless children’s ride toys and Ikea furniture. I once built a Chevy 327 small-block from scratch.

I knew this guy needed help.

And who was better qualified on that potential flight to assist our inept airplane repairman than I was? Not the software consultants, stuffy businessmen, and regional sales managers sitting all around me, that’s for sure—those guys couldn’t repair a flat tire on a kid’s bicycle.

So when Georgina went to the back of the plane for more orange juice and Bloody Mary mix, I made my move. The cabin door was still open (because it was so hot), so it was easy. I climbed over the starched shirt executive-type sitting next to me, sprinted down the aisle, onto the jetway, out the service door, and down the ladder.

I heard someone shouting behind me—Georgina, probably, or Flip the Captain—but I ignored them; I had to get to the JettPro Line Maintenance man before he did irreparable damage to our aircraft.

Standing beneath the funny-acting broken starboard engine, I hollered up at the technician (his name, I learned later, was Jesús). “Hey Dude,” I shouted. “You have to tighten that thing there.” I pointed at one of the parts I recognized.

Jesús glared down from his perch. He shouted something back at me—it was hard to tell exactly what he said because of all the noise from the airplanes coming and going, but it sounded like, “What the fuck are you doing down there!”

It was right at that moment that I felt a powerful hand grip my shoulder. I was spun around to see the face of Flip Shoemaker. He seemed upset—probably because of the broken airplane.

He pointed towards the jetway. “Get back in the plane, sir!”

I tried to explain to the cantankerous pilot that I was just trying to help, but Flip wouldn’t listen. “Get in the plane immediately or I’ll have you arrested, Mr. Hanson,” he shouted.

I wondered how he knew my name, but then realized that that bitchy androgyne Georgina must have told him; I’d seen her earlier with a passenger list, that traitress. In any event, the captain appeared unwilling to avail himself of my mechanical advice. I shrugged and went back to the plane.

I was greeted at the door by Georgina, that bitchy drag queen. Her face was red like a tomato, and I noticed a small vein throbbing in the center of her forehead—Captain Flip must have lit into her being so rude to the passengers. He clearly ran a tight ship.

As I pushed past Georgina on my way back to 17F, I asked her again for a beer, but she wouldn’t budge. “Get in your seat, sir.”

Twenty minutes later, Flip came back on the intercom. It was bad news—Jesús was unable to repair the broken engine—it was still acting funny, he said—and we had to switch planes. As I filed off the airplane with the rest of the passengers, I saw Captain Shoemaker by the First Class toilets, talking to Georgina.

“Hey Flip,” I called. “You should have listened to me. We could be on our way right now.” Flip just scowled and went back to the flight deck, closing the door behind him. Some people are really ungrateful.