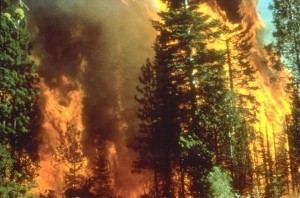 Like most boys, I’ve always wanted to be a firefighter. Who wouldn’t? All that gear: the shiny metal axes, clanking oxygen tanks, rubber boots and yellow helmets and facemasks made of high-temperature thermoplastic. And never mind the pumper trucks with their shrieking sirens, the water gushing from high-pressure hoses, vehicles so huge they take two burly men to drive. Wow.

Over the years I’ve started some fires (it was an accident), and I’ve burned away most of my facial hair a few times (lighting the grill), but that’s as close as I ever came to the dragon. Until now.

I was on my way home from Basha’s when I saw it. The smoke. Forty-five minutes earlier, the Nordic Warrior Queen had closed the refrigerator door and announced we needed milk, eggs, bread, mustard, and broccoli. Devoted husband that I am, I quickly volunteered to go grocery shopping.

I hate broccoli, so this way I could tell her they’d sold out, and get cauliflower instead. And maybe stop for a beer on the way back.

Driving home, the groceries safely secured in the back seat, I noticed the air was hazy and dark. The mountains stood in the distance, barely visible through the gloom. I rolled the window down and immediately smelled burning. What was going on?

Ten minutes later, I was watching the TV news. SPECIAL REPORT scrolled across the bottom of the screen. My stomach dropped. There were wildfires throughout Arizona, the closest less than an hour away, in Sunflower, just south of Payson. “Zero percent containment,” said the grim-faced reporter.

Something had to be done, but what?

It was obvious they needed help. But what could I do? I’m just one man. “Better a small help now than a big help later,” I thought to myself. Bilbo Baggins said that. I think. Or it might have been Frodo. But truer words were never said, so I buckled on my heaviest jeans, applied a generous layer of sunscreen, grabbed a shovel and a baseball hat from the garage, and headed to Sunflower. Time to shake the dragon’s tail.

Fifty minutes later, I was at the scene. The command center stood off to my left. Pumpers and engines were everywhere, forming a loose semicircle at the base of a burned-out clearing. Brush trucks carted men and supplies back and forth to the fire, just over the next hill. Watertankers and Slurry Bombers roared overhead, and the air was dense with steam and smoke. The fire bellowed defiantly.

It was complete pandemonium.

There was no sense in announcing myself. Everyone was obviously busy. Besides, I was ready to go. I parked my yellow truck near the edge, grabbed the shovel from the back, and headed for danger.

I sprinted up the hill past less capable firefighters, ignoring their shouts of indignation, a one-man strike team going into the black, alone. Within minutes, I could feel the awesome heat, see the flicker, hear the crackle of destruction. I knew this was where I was always meant to be: standing in the mouth of the dragon.

Wielding my shovel, I immediately began laying down a suppression trench, and from there I would expand my safety zone. I didn’t have much time. The fire was getting closer, a hungry beast, intent on my destruction. I laughed in defiance. I was John Wayne in Hellfighters, I was Red Adair, I was…

“Hey you! Just what in the Sam Hell do you think you’re doing?”

A huge troll of a man stood not ten feet away, an axe in one hand, a bullhorn in the other. Beneath his grimy helmet, his face was as red as the fire. “Who are you?” he shouted.

Despite his obvious anger, I was undeterred; I was in the zone, a firefighting machine, and no one would stand in my way. “I…uh. I’m Kip. Kip Hanson. I’m fighting the fire.” Duh. Wasn’t it obvious what I was doing? “Who…who are you?”

For a moment, I thought he wasn’t going to answer. “I’m Captain Roy Marshal. I’m in command here. Show me your Red Card,” he demanded.

As we headed back down the trail, he cussed me out using colorful language I’d never imagined, even after twenty years of working in a machine shop. Finally, he fell quiet, and looked over at me, huddled against the door. “You could have been killed, you know that?”

“I just wanted to help.” A single tear escaped, coursing down my dirty face.

He turned away in disgust. Three minutes later, he stopped next to one of the pumpers and pulled me out with a hand the size of a picnic ham. He pointed at the road. “Get home.”

Dragging my shovel through the dirt, I walked to my truck, now covered in ash. I was utterly defeated. He watched me unlock the door before finally turning away.

Roy shouted over his shoulder. “What is it now?”

“Can I sound the siren? On the pumper?”

He turned around and gave me a strange look. “Let me guess. You always wanted to be a firefighter.”

There was a small grin on his face as he answered. “NO! Now get the hell out of here.” He climbed back in his truck and sped off towards the fire. Prick.

I got in my truck and drove away, watching the fire recede in my rearview mirror. By the time I arrived home, the news was reporting that the fire was now 5% contained. Thanks to me.

I took a shower and went to bed.