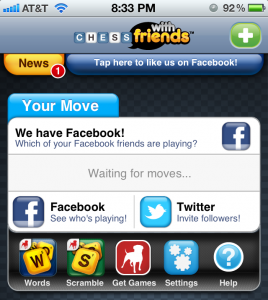 We’d played together for years, sometimes six, eight times a day. But we were always discreet about it, keeping the frequency of our games a secret from even our wives. Together, we’d learned the rules of this gentle contest, the strategy and tactics, the give and take.

And now after all this time, he was gone.

There was no text message to explain his absence, no phone call to say his app was broken. He just stopped, with no explanation. After all the maneuvering, the sacrifice…I was alone.

This wasn’t some Gilbert O’Sullivan alone: no whining over an empty altar for me, no leaping from a tower to ease my pain. I was utterly bereft. All I had left were the cold words “Waiting for moves” on a frozen iPhone screen.

Who was I supposed to play with now?

True, we’d both tried to control the center. He would advance his rook, and I would counter with a gentle thrust of my bishop. But we always took turns in our attacks. At times, he would be the aggressor, and I would lie passive; the next day, we would reverse roles. We always played fair, I swear.

Had I pushed too hard?

I’d tried not to corner him. I’d offered favorable exchanges, and sometimes allowed him to attack my flanks so he could attain a comfortable position. Occasionally I even went so far as to pull my pawn out early, to give him room to advance.

And oh…the suffering of our pieces. How we abused them, just to gain a square or two, to push a few inches deeper into the battleground of our pride.

I admit now that I’d looked for new techniques. When I knew it was safe, that I had the upper-hand for a moment, I would steal a quick glance at chess.com, or Google “Ten Best Chess Openings.” But it was only to make things more challenging, to deepen the pleasure of the game. I never meant to hurt him. Through it all, I always tried to be gentle, especially when I was on top.

And now, he was gone.

I questioned myself. Was I too aggressive? Was he tired of it all? Should we have tried new positions?

And then I grew angry. Impatient. What was I supposed to do—wait on him forever? So I did the unspeakable. I found a new partner.

It was an online service, promising an endless variety of games and players. Random opponents with strange names like DeepBlue, Blitzkrieg97, EndGame11, and Kasparov’s_Bitch.

I hid my indiscretion, playing in the bathroom, or in bed after my wife was asleep. I never told anyone. But after a while I had to ask myself: who were these strangers I was spending so much time with?

I never saw them, never knew their real names, what they looked like or what sort of beer they drank. All I knew was their hunger to win. There was no give and take here, no friendly competition, only an endless urge to conquer and move on to the next sucker.

All of them were more experienced than I. Before I knew it, the game would be over and I was off searching for the next opponent. None of them would stay with me as Captain13 had done for all those years. No. It was a game or two at most and then they were gone. Wham, bam, checkmate, and on to the next game. That’s how these people played.

These were meaningless exchanges.

After a few days, I couldn’t do it anymore; I simply couldn’t play with people like this. Complete and total competitors. It made me feel so…dirty. And in the end, defeated.

Take me back, Captain13. It didn’t mean anything, really. You have to believe me. I promise I’ll never stray again.

Previous Post
« Opportunity of a Lifetime
Next Post
Ode to a Mother’s Advice »
Mr. Ass
Calotropis Theme designed by itx