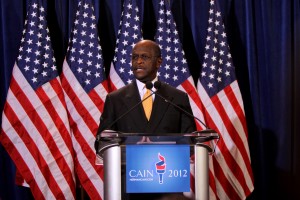 The Nordic Warrior Queen and I agree on most things, but politics isn’t one of them. For starters, I like Herman Cain. My wife likes…well, nobody. With things as they are in Washington these days, maybe I can’t blame her.

Herman Cain and I have a lot in common – he likes pizza, I like pizza. He’s a Republican, and I am too, sort of, at least when I vote. And we both worked at Burger King, Home of the Whopper. He might have been paid more than me.

Cain even came to Scottsdale last month for a press conference. Maybe we drove past one another on Frank Lloyd Wright Boulevard, or sat at the same stoplight. Who knows?

I didn’t see the press conference, but I guess he addressed the sexual harrassment allegations raised against him by all those women. Karen K-something. Sharon so and so. There was someone else. Like Cain, I have a hard time remembering their names.

I don’t want to see Cain go the way of so many of his peers – Gary Condon, Anthony Weiner, John Edwards. And what’s the truth, anyway? It’s just his word against four or five women. It could all be a big Democratic frame-job.

So I decided to call him. After all, Cain and I are both former Minnesotans. Surely he’d talk to me. And I had to know the truth.

I had a hard time getting to him. His staffers were reluctant to put my call through, but after I explained the situation (I might have stretched things a bit), they finally connected me to Cain.

“Umm, this is Kip, from Scottsdale. You were here a few weeks ago, remember?”

“Sorry, the name doesn’t ring a bell. Just a minute please.” At this point I heard him cover the mouthpiece, and then what sounded like someone yelling in the background. Who is Mark Block, anyway? I think he might be in trouble.

“I just want to know if it’s true, Mr. Cain. That thing with all the women.”

“Listen, I really don’t have time for…” He sounded a little angry

“Herman, listen. Your 9-9-9 plan is brilliant. And I really like Godfather’s Pizza.”

There was a long pause. I knew I had him. “Umm…well, there was that time on the pizza counter, but nobody ever said anything about that. And once during the Dole campaign, I shared a taxi with a woman and she…what did you say your name was again?”

“I’m sorry to have bothered you, sir. Best of luck with your wife.”

“Listen, I’m just a very generous person, that’s all. And I…”

I hung up the phone. I guess being a politician doesn’t make one smart. Looks like it’s up to Newt.