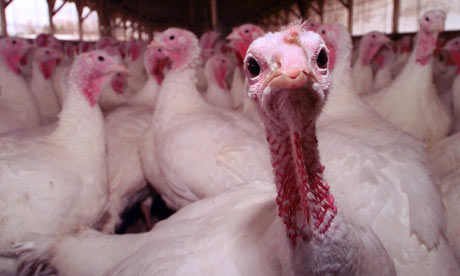 Young Tom watched in fear as his brothers, uncles, and finally his father were taken away by the big man in the blood-soaked coat. None of them had said a word; had only stared wide-eyed each time the door was opened and one after another of them were pulled out.

Tom had urged them to fight, had tried to convince the group that together they could rush the man, knock him down and somehow escape the camp. But Tom’s father nodded his head at him in grim warning. No, stay quiet; maybe you’re still young enough they won’t want you. Live another day, that nod said, and then he was gone.

From outside the steel walls of the building came the sound of other men, speaking in a guttural language Tom didn’t understand. He had seen them coming and going all summer, and had come to recognize some of them. There was the fat one who came in twice a day to fill the trough with stale grain and occasional kitchen leavings. There was the thin spectacled man who came in twice each month to inject them with strange chemicals. And then there was the cruel boy.

The boy was evil. He poked sticks at them through the bars; threw rocks and peed on their heads. He sprayed them with cold, cold water, laughing at their huddled shivering, and had once dragged Tom’s younger sister from her bed and swung her round in circles by her feet. At night, Tom could still hear her screams of terror.

He hated the boy, hated him even more than he did the fat man. And someday, Tom would get revenge.

Rage kindled in Tom’s young heart as he listened to the confused weeping of the females. Aside from his older friend Roy, he was the last male left. He refused to go the way of the others. And just then came the snick of the door, and in walked the blood-soaked man.

Tom waited patiently. There would be but one chance. As the man reached for Roy, Young Tom attacked. He flew at the man, clawed at his face, screaming a fierce cry of defiance. Startled, the man threw his hands up, stepped backwards once and fell, striking his against the metal jamb of the door. He was out cold. With a creaking groan, the door swung open.

Shrill cries of admiration came from the others. “You did it, Tom. You did it!”

Tom turned to the others. “Run,” he yelled. “Run for your lives.”

They ran, trampling the man as he lay bleeding on the ground. Through the echoing building and out into pale Autumn sunshine, Tom led them all to freedom.

And then, the evil boy, running towards the flock, his arms wide. “Pa, Pa! Them damned turkeys are getting loose.”

Billy Thornton’s father looked up to see next year’s flock of Thanksgiving turkeys excaping the barn. That damned Orville was good for nothing. Dropping his bloody hatchet, he urged the hired hands to action.

Tom stood frozen in horror, the confused flock bunching up around him. Carnage. Gore and terror. There before him, the headless bodies of his lost kin swung by their feet from a long silver wire. Their once-beautiful feathers hung limp, sodden with blood, their wings dangled sadly, their necks still leaking a few drops of crimson.

The evil boy approached, his arms akimbo. But despite his fear, Tom was ready. With the terrified sound of the flock behind him, Young Tom launched himself at the boy, feet spread wide. Billy Thornton screamed as the yearling’s claws sunk deep into his pimpled face. Tom Turkey pecked at the boy’s eyes, ripped his ears, gouged his head and tore his hair. The boy fell to his knees, crying tears of rage, and Tom made his move. “Follow me,” he yelled, and with the flock behind him, ran for his life.

Most of them made it. Tom weaved and dodged across the yard, ducked beneath the legs of the hired hands, closer and closer to the gate with its big sign that read THORNTON TURKEY FARM. With a final cry of defiance, Young Tom led what was left of his flock to freedom.

Later that night, as they bedded down in the forest, Tom looked around at the flock. This was the life, he thought. Freedom at last. His father would be proud of him. Today, there was a lot to be thankful for.

And then from the darkness, the voice of his friend Roy. “Tom? Tom? Are you there, Tom”

“What are we supposed to eat?”

With a tired cluck, Tom tucked his head under his wing and slept. Let tomorrow fend for itself.