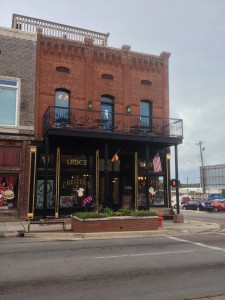 My boss called me last weekend. “I need you in Arkansas, ayy-sap.”

No please or thank you here. Just ayy-sap. “Sure, what’s up?” What else can you say when your boss calls on a Saturday morning?

“Customer’s in trouble. Just go.” She hung up the phone. The email with travel instructions arrived seconds later.

Fly on a SUNDAY? No effing way. I immediately called her back. “I thought we agreed no weekends.”

“I know things you don’t,” came the curt reply. “Be there at eight Monday morning. Dress appropriately.” Click.

That’s how she rolls.

I broke the news to the Nordic Warrior Queen. She was crestfallen. “Debbie, looks like we’re shopping tomorrow,” she called.

I flew to Memphis and then drove north. Sometime after eight, a big sign greeted me: Welcome to Arkansas, the Natural State. I arrived in Jonesboro an hour later.

It’s a small town, and the only restaurant still open was an Irish pub. In hindsight, I should have settled for the bag of pretzels I stole from the drink cart when the flight attendant wasn’t looking. I would have got more sleep.

Still, the Bangers and Mash were great. So was the beer. I was halfway through my second Guinness, wondering why everyone in Arkansas sounds like Hank Hill and says things like rackensack and gallanipper, when Bill Clinton came in the door.

He was surrounded by eight Secret Service men.

Teflon Bill slipped into the stool next to me and ordered a drink. We talked politics, mostly. Egypt, Nelson Mandela. Bill was continually distracted by the waitress. “Look at the ass on that one,” he said with a nudge.

The girl was younger than his daughter. I tried to keep him on track. “How about the Kim Jong-un?”

“That boy’s crazier’n a June bug in a fry pan,” the Compromiser in Chief exclaimed, and ordered another whiskey.

The bartender set down the drink. Bill pointed at the TV. “Hey, don’cha have HBO on that thang there? Let’s watch us some tits. Yeehah!”

The other patrons stared. A woman quickly led her two children out the front door. I had to get the old hound dog calmed down. “How’s Hillary?”

He seemed disappointed by the change of subject. “Hillary…is just fine.”

An uncomfortable silence followed. “So, you think she’s going to be the 45th president?” I was trying to make small talk.

Bill looked glum. He guzzled the last of his Jameson’s and ordered another. “I hate to say it, but I’ve been checking your blog lately.” I could tell the 42nd president was punishing me for the Hillary comment. “Looks like you’ve been slipping a bit there, old son.”

“Been a bit busy lately, Bill.” It was true. Between work and writing for the trade magazines, I simply haven’t had time.

“Probably been busy chasing that little filly of yours around the house,” Bill leered. He slapped me on the shoulder, shouting, “Am I right?” The Secret Service men were getting nervous.

Bill was on his fifth drink by now. He started singing the Arkansas Traveler. “On a lonely road, quite long ago, A trav’ler trod with fiddle and bow…”

Two of the Secret Service guys came over. Grabbing the one-time jogger by the armpits, they picked him up faster than Usain Bolt with the green apple trots. “Let’s go, sir,” said one.

Bill was having none of that. “You boys are a bunch of suck egg mules.”

The agent seemed unconcerned by the verbal abuse. “We have to go, Mr. President.” When Bill struggled, he pulled out his trump card. “Evergreen is waiting,” the agent said in a low voice.

Bill perked up. “Woohoo”” he exclaimed, and tossed off his drink. “I love it when you pickaninnies call her that.” He threw his head back. “Hillary, I’m COMING!”

I watched through the window as the Secret Service men hustled Bill Clinton off to the limousine, then finished my beer and motioned for the check. I was really tired.

The bartender set it down and hurried off: $97.

The old campaigner stuck me with the tab.