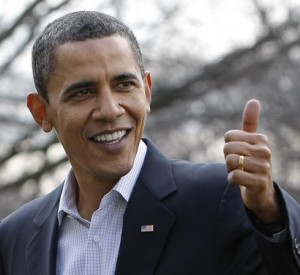 After my last email to President Obama, he sent me a nice thank you note along with his personal phone number. “Call me anytime,” he said.

Since I couldn’t get my point across to Boehner on this whole fiscal cliff thing, I decided to call Obama. Maybe he’d listen.

The phone picked up on the first ring. “Barack here.”

“Yes, this is President Obama. To whom am I speaking?”

Boy, these guys are big on their titles. “This is Kip.”

“ Um…Kip?” From all the background noise, it sounded like he was in a meeting.

“I sent you  the email a few months back. Laxative commercials during dinner? Ring any bells?”

“Ah, yes. I remember now. But how did you get my direct line?”

“You gave it to me.” No wonder this guy needed so many aides.

“Oh. I see. Kip.” There was a long pause and the sound of papers rattling. “Well, I’m afraid I don’t have very good news on your problem, Kip. I was working on some legislation see, but I got a little sidetracked.”

“For your hemorrhoid cream issue, of course.” Duh!

“It was vaginal cream, actually, but that’s not why I’m calling.”

People were laughing in the background. “I want to talk about the fiscal cliff.”

“Oh, that.” He sighed. “Can’t we talk about laxative cream?”

“Boehner wanted to talk about laxatives?” He laughed. “You know, I wanted to call it the fiscal hill, but he said that sounded too much like Capitol Hill, and we can’t have the American people associating their financial problems with Congress.”

“Of course. You guys are the ones who elected Bush. I didn’t do it.”

“So this is all Bush’s fault.” I heard what sounded like a champagne bottle popping, followed by music.

“Of course. Everything is Bush’s fault. His or John McCain’s.”

“Mr. Obama. There’s only a few hours left. What are you going to do to stop this?”

“President Obama, please.” There were glasses clinking in the background.

“You know, I don’t want to make excuses, but I’ve been a little sidetracked lately. This whole thing with Malia and the cell phone has me really bugged. I guess I’m just upset about it is all.”

“Your daughter got a cell phone so my taxes will increase?”

“Well, just a little bit. Everyone has to pay their fair share, you know.”

At this point he covered the phone, and I heard what sounded like “tell them to wait for the clown,” and “get the piñatas ready.”

“Sorry, where were we? Oh yes, the cell phone. I can tell you, Michelle and I had a good old-fashioned, knock down, drag out on that one.” He laughed again. “But the First Lady set policy, as usual.”

“What about the fiscal cliff, sir?”

“Well, I’d love to stay and chat, but we’re having a little celebration here tonight.”

“WHAT! No, of course not. Terrible news there, I hope you people weather it.”

“Why, Michelle’s and my pay raise, of course. Congress just voted to increase federal employees pay by half a percent, and that means me too!” He giggled. “You can be sure there wasn’t any bickering over that one.”

“You and Congress get a raise?”

“And just in the nick of time. Michelle told me Sasha wants a cell phone too. Maybe I can get them on a family plan.”