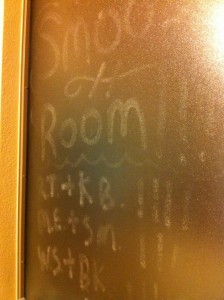 The Nordic Warrior Queen was the first to notice the ghost writing on the window. It looked something like “Smooshie’s Room,” and we laughed about it.

We thought it was just some simple, “schoolgirl decorating her room” sort of thing. After all, Smoosh seems like a cute nickname for a girl, and if she chose to write it on her bedroom window in a broad, cursive, love-sick teenage stroke, where’s the harm, even if she did it with nail-polish? Irritating, perhaps, but still an innocent act nonetheless.

I complained to the property manager, but apparently they can’t remove it. It’s permanent. Okay, whatever.

And then I started thinking: Smoosh? That just didn’t sound right to me. It sounded…well, kind of sexual. And what’s with the R.T. + K.B IIII, and M.E. + S.M. III – like some sort of game score. Obviously not Monopoly or Risk, but video games maybe?

It didn’t make sense. So I Googled SMOOSH. It turns out that Smoosh is “an American indie pop band from Seattle, Washington. They have released three albums, She Like Electric, Free to Stay and Withershins.” Okay, I’m an old guy. I never heard of them, nor do I know (or care) what “Indie” means. Mystery solved, right?

Still, what’s with the weird scoring, and the apparent team play? It just didn’t fit. So I searched again, this time for “SMOOSH DEFINITION.”

And here’s the usage of smoosh in everyday language: “Snookie want smoosh smoosh!”

I can guess at DTF, but I’m not sure what “orange people” are, not that it matters. I know enough already.

I’m sleeping in what was once a brothel. A room of ill-repute. A sexual safe-house. This girl brought her friends up to her bedroom to have an organized and regular sex contest, to see who could fuck the most.

Jesus. I guess I’m old-fashioned. I’m not sure if I’m offended more at the vulgarity of the whole thing – the coarse, wanton, cheapening of the sexual act, or that it’s going to take me so long to catch up.

Times have changed, I guess.

P.S. Last night I asked the Nordic Warrior Queen if she wanted to “smoosh” around a little bit. She told me to smoosh off, and go to sleep.