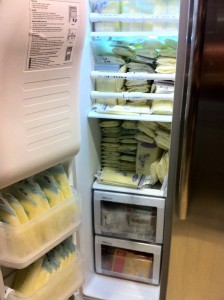 While visiting my daughter and her new baby this weekend in San Diego, I’ve come to appreciate motherhood: changing diapers forty-seven times a day, managing a tightly coordinated schedule of bathing, feeding, napping, burping, crapping, and playtime, and keeping the kid entertained with coo-coo-coo and shh-shh-shh in between it all.

Raising a baby is a lot of work.

My once-tomboy daughter has evolved into a baby-bouncing, wheel-on-the-bus-singing, nursery-rhyme-spouting model of motherhood, capable of changing a cranky, puke-spattered and beshitted infant in 3.2 seconds flat, all while keeping the kid’s clothes color-coordinated. She’s amazing.

And that’s not all. While I hesitate to discuss anything related to my daughter’s naughty parts, I have to tell you; this girl is a breast milk producing machine.

I’m not bragging, but her boobs have been known to spontaneously spew such incredible fountains of milk that she had to install a special dual-head pumping unit in her bedroom, just to keep up with the industrial flow rates of her leaky girls (affectionately named Sally and Bessie).

My son-in-law had to put a second refrigerator in the garage to store the hundreds of gallons of breast milk, and when my daughter went back to work last week, the US Navy constructed a special lactation unit on base so she can keep her milk-spouting hydrants under control while still defending our nation’s freedom.

My little granddaughter Kaylie struggles valiantly to keep up with the copious supply, but that’s a bit like a Toyota Prius trying to consume the Persian Gulf oil reserves.

All this excitement is tiring, to be sure. When they’re not focused on baby-raising or milk-production, the new parents sometimes take a well-deserved nap with their daughter. Which is why yesterday, while the Nordic Warrior Queen was out shopping with the Sister-Wife and the kids were upstairs sleeping, I was enjoying the quiet.

That’s when I heard a car pull into the drive.

Knock, knock, knock. I jumped up and rushed to the door to find a middle-aged woman standing on the porch. She was sharply dressed, and wore tightly creased khaki pants and a no-nonsense blouse. Her hair was pulled back in a bun so tight it made my temples hurt to look at, and a shiny badge glittered on her blazer. She was carrying a clipboard; my first thought was Oh no – a survey taker.

The words, “I’m sorry, but I’m busy…” were leaving my mouth when she interrupted me; raising her hand, she announced in an official-sounding voice, “Sir, my name is Officer Clarabelle McAndrews of the United States Food and Drug Administration, and I represent the Office of Mothers for Lactation Control, Regulation, and Safety. MLCRS, for short.”

“I’m sorry…what did you just say? MILKERS?” What the hell was this?

“Yes, sir. MLCRS. And I’m investigating a complaint of unauthorized breast milk storage and production at this residence.”

“Yes sir. From the San Diego chapter of the Milking Mamas.”

“No sir, this is a most serious matter. My office is authorized by the federal government to investigate lactation practices, both public and private.”

“Sir, it’s our understanding that there’s enough breast milk stored onsite to feed half the newborns in San Diego. I’d like to inspect the premises, please.”

With her steely badge, her authoritarian manner: what else could I do? I opened the door. She immediately stepped past me and headed straight for the refrigerator. As she opened the door, she gave a low whistle. “Is this everything?”

She turned to me, incredulous. “You mean there’s more?”

Reluctantly, I led her to the auxiliary storage unit in the garage. “Sir, I’m afraid we’re going to have to confiscate the excess. The lactation levels are entirely too high here.”

She walked out to the trunk of her late-model government-issued sedan and began to lift out several insulated chests. I had to stop her. As she lugged the coolers to the door, I made a desperate attempt. “Clara? Please…you can’t take the milk. My granddaughter needs it.”

She looked up, her face a mask of relentless authority. “Sir. I’m just doing my job.”

“But…but,” I forced a tear from my eye. With a hitching voice, I made my play. “What if…what if I made…a donation?”

“Yes. I’ll donate to the Milking Mamas. A hundred bucks.”

A greedy sparkle appeared in her eye. “Sir, are you trying to bribe me?”

Apparently, corruption runs even to the lowest levels of the government. She shook her head, playing coy. “Afraid not, sir.” She knew she had me.

Anything to make this go away. Extracting a wad of twenties from the back of my wallet – the last of my secret beer-money stash – I pushed it at her. “Two-hundred forty. That’s all I have.” With a wry smile, she pocketed the cash.

With that, she got into her car and drove away. As I closed the door, my daughter came downstairs. She was carrying several quarts of milk. “Who was at the door, Dad?”

“Oh, just a solicitor. I sent her away.”