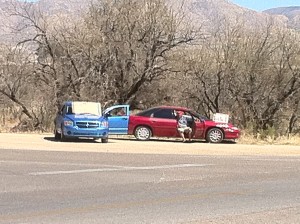 When the Tamale Man jumped out of his car, I knew there would be trouble.

After all, this was his spot: he’d been working this street corner for years. The black spray-painted letters on the flaking plywood sign reading TAMALES FOR SALE were by now faded to a nearly uniform gray. The huge Rubbermaid cooler sitting in the trunk of his beat up late-model sedan was cracked and sun-bleached.

He was the king of tamales, and he’d earned his right to be there. There was no way he was sharing his prime real-estate with some wet-behind-the-ears newcomer.

But the Honey Guy didn’t care. He pulled up kitty-corner to the Tamale Man’s car, set out a big folding table, and started spreading out his sticky goods like he owned the place.

The Tamale Man was having none of this. He walked over and began swearing at his competition in ardent Spanish. The Honey Guy responded with nothing but silence, and continued stocking his table.

The Tamale Man was livid. He gave the Honey Guy a shove, but to no effect; apparently, eating all that honey made for a turn-the-other-cheek attitude. He just turned away and went back to his car for some boxes of honeycomb.

I could tell that the Tamale Man was about to take it to the next level: what right did this bee-loving asshole have to invade his turf?

I was in a dangerous situation and knew I should leave immediately, but wanted to score some tamales first. I caught the Tamale Man’s attention and signaled for a dozen; after a moment he swore under his breath, begrudgingly turned away from his hostile glaring at the Honey Guy, and stalked back to his trunk to fill my order.

I paid him five bucks and turned away, anxious to leave before the situation escalated. It was just then that the first car pulled up. Its driver got out and, ignoring the Tamale Man, went straight for the Honey Guy’s display.

Without warning, the Tamale Man lost control. Shouting Spanish obscenities, he started chucking frozen tamales at the Honey Guy. The Honey Guy’s customer ran for the safety of his car, jumped behind the wheel and sped off. I ducked behind the bed of my pickup truck just in time to observe the Honey Guy snap.

His calm demeanor disintegrated; the turn the other cheek attitude melted away. Filled with sudden rage, the Honey Guy reached down, picked up a two pound jar of honey, and whipped it at the Tamale Man’s head, just missing him. It bounced off the hood of his car and shattered like a bomb.

Suddenly the air was filled with frozen tamales and enchiladas, bottles of picante sauce, jars of honey, dripping honey comb and bursting bags of crystalline honey hard candy. It was the food fight from hell, and I was stuck at ground zero.

The Tamale Man was gradually wearing down the Honey Guy’s defenses, but his armory of Mexican food was nearly depleted. He wasn’t giving in to this honey-sucking newcomer just yet however: the Tamale Man ran for the back seat and, grabbing up a huge Dora the Explorer piñata, rushed in for the kill.

What’s worse, anti-honey reinforcements arrived just then in the form of the Tortilla Dude, who happened to be the Tamale Man’s cousin, and worked the other end of the street.

The Honey Guy was doomed.

I figured it was time to get the hell out of there. I grabbed up my plastic grocery bag of tamales and fled, just as tortillas started whizzing ninja-fashion through the air like flour and corn Frisbees.

The last I heard, the Honey Guy was setting up shop somewhere near Salt Lake City, as far from Mexican food as possible. I wish him luck.