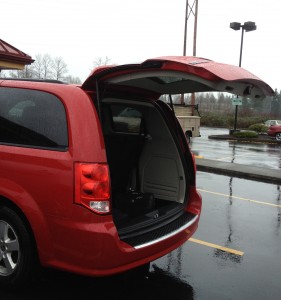 One of the drudgeries of business travel is renting the car. You’ve just flown halfway across the country, jammed into an airplane filled with crying babies, farting fat guys, and Sudoku-playing armrest grabbers. At the end of this odyssey, when you’d like nothing more than to crawl into a dark corner somewhere and suck your thumb, comes the car rental.

Your employer would put you on a skateboard if he could save a couple bucks. As it is, you’re lucky if corporate policy lets you reserve anything larger than a Smart car.

The rental car companies feel your pain, however, and if you’re a loyal customer, which means you’ve driven more miles than a retired long-haul trucker, they might upgrade you to a Ford Focus, or maybe a lemon-colored PT Cruiser.

I’m not so lucky. Although I’ve rented enough cars to fill the deck of an aircraft carrier, and am a card-carrying member of the Enterprise Emerald Club, the Hertz Gold program, and the Alamo Insiders, my latest car rental found me in a minivan.

It wasn’t just any minivan, either. No sleek Nissan Quest here, or a sporty Mazda5. It was a Dodge Caravan, second cousin to Lee Iacocca’s 1970’s wet-dream, the Chrysler K-Car.

Red like the ass-end of a rhesus monkey, and with enough room to seat a Little League team, this thing was plain old butt ugly. I wouldn’t drive a car like that if tomorrow was Armageddon day and it was my only chance to escape certain death.

I took one look at it and went back to the rental counter. “Dude. You gave me a fucking minivan?”

The agent, who bore a striking resemblance to George Costanza, was nonplussed. “Just a minute please, sir. Let me check our records.”

Fifteen minutes later, George confirmed that, yes, they had assigned me a big ugly piece of crap. He offered up a vague but hopeful justification. “A lot of famous people drive minivans, sir.”

“Like who?” No way was I falling for this tactic.

“Sarah Jessica Parker, for one.”

“Jesus. She has three kids. Of course she has a minivan. Who else?”

George demurred. “Does too.”

“She’s married to Ben Affleck. That means he drives a minivan, too.”

Tired of the conversation, I raised my hand. “I seriously doubt that Ben Affleck drives a minivan. And to be honest, I don’t give a shit either way.”

George stared nervously at me, unsure how to continue. I helped him along. “You were about to offer me a different car?”

“Certainly, sir,” he said briskly. “Let’s take a walk to the garage and see what we have available.”

“Well, I’m happy to set you up with that car, but are you absolutely sure you don’t want the minivan?”

I couldn’t believe the nerve of this guy. “Aside from the prestige of driving the same car as Sarah Jessica Parker, why would I want a minivan?”

He rubbed his hands together, as though preparing to argue a Supreme Court case. “Well, sir. Just let me show you some of its features.”

“I don’t want to see its features, George. I just want to leave this smelly parking garage and find my hotel. I have an early morning.”

He looked at me strangely. “Ah, sir? Who is George?”

He started by showing me what he referred to as the van’s cockpit. “You see? It has Dolby surround sound, Bluetooth, and GPS.”

I admit, the dashboard had more buttons than an Imperial Death Star. “I don’t care. Give me the Camaro.”

He could tell I was impressed, though, and started explaining the car’s other features. “Take the air conditioning, sir. The seats in the Dodge Caravan can sense your body temperature, and adjust the climate accordingly. They offer the ultimate in driving comfort.”

“So? They keep my ass warm. Big deal.” Still, heated seats might be nice, especially at this time of year.

“How about rear-view cameras, auto-parking, and collision avoidance?”

The Camaro was beginning to look like a horse and buggy compared to the Caravan. “What else, Abdul?”

“Watch this, sir,” and with a flourish of his hand, waved the car’s keyless entry dongle. I heard a beep, beep, beep, and the rear gate opened as if by magic.

“It’s all part of the Caravan experience,” he said with a smile.

He pushed the remote control and the rear hatch swung down like a prom dress at midnight. “Still want the Camaro, sir?”

“No!” I grabbed the dongle from his hand and pushed the button for the rear gate. Beep…beep…beep. It was like the opening of Heaven’s gate.

Abdul started back to his desk. “Have a good night, sir. And drive safely.”

As I pulled onto the freeway, I looked about at all the BMWs and Audis, the Toyota Camrys and Nissan Pathfinders, and considered how fortunate I was to have the Caravan. Maybe I would rent it for an extra day, and just cruise downtown Seattle.

I love my red minivan. And why shouldn’t I? It’s the same car Ben Affleck drives.