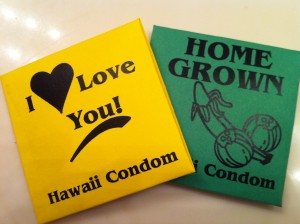 The clerk behind the counter of the ABC store was the size of a volcano. He stood six-ten at least, went four, maybe four-hundred fifty pounds, and spanned nearly the entire width of the cigarette rack behind him, from Benson and Hedges to Winston. I figured this guy could eat the entire pig at the luau.

He stared down at me for several long moments before speaking, and in a delicate singsong voice, fluted, “What seems to be the problem, sir?”

I tried to read his name badge. Damnit, I’d left my glasses back in the hotel room. Near as I could tell, it said:

Aloha, my name is

“Okay, great. Let’s start over.” I pushed the box of condoms towards him like a peace offering. “I’d like to return these, Al.”

He caressed the top of the box with an index finger the size of a tree branch. “Sir,” he said in his disturbingly woman-like voice. “The box is open.”

“The box is open,” he repeated. “I can’t take them back.” He seemed embarrassed.

“But…they’re no good. Can’t you just sell the rest of them as singles?” I turned to point at the shelf where they sold the single packs of condoms, but there were two customers standing in line behind me, blocking my way.

Al was getting frustrated. “Sir, I…what’s wrong with the condoms?”

Hawaii must have 8,000 ABC stores; why did I have to pick this one? I hadn’t even bought the damned condoms here, but I didn’t want to return them to the place where I got them two days earlier because the girl behind the counter had started laughing when I left the store.

“Al, please. Just take them back. They’re…they’re too tight,” I blurted.

He looked down at me from the ceiling. “Too tight? Really?” He appeared doubtful.

I leaned in close to the counter. “I think they must make them for all the Japanese people here,” I said in a conspiratorial whisper.

A dark cloud appeared on Al’s immense forehead. “I doubt that, Sir. I’m half Japanese, and they fit me just fine.” Al parted his lips in a tight grin, revealing bright white teeth. Behind me, the line was backing up. Someone coughed.

I stammered. “Yeah, okay, but the color, Al. They glow in the dark. My wife screamed when she saw it. She said it looked like a huge green snake coming at her.”

Al looked me up and down, a slow grin spreading across his face. “A HUGE green snake, sir? Really?” I heard someone laugh.

What was this pineapple-eating asshole saying? “Okay, Al. Maybe it wasn’t a huge snake. Maybe it was just a common Garter Snake, or an average-sized Corn Snake. Will you just take them back? Please?” The line was ten deep by now, and growing restless.

“But, Al…” Why, oh why did I ever buy an entire box of these cursed things?

YES! “Thanks, Al. I really appreciate it.” Someone in the line applauded.

“What’s that show they have in the States, sir? The one with Regis Philbin?”

Someone at the back of the line shouted, “Who wants to be a Millionaire?”

I tried to correct him. “I think you mean ‘Final answer’ Al,” but just then the guy fifth in line started chanting, “No DEAL, no DEAL, no DEAL,” and pretty soon all twenty-seven patrons of the ABC Convenience Store on Kalakaua Avenue in Honolulu, Oahu were shouting, “No DEAL! No DEAL!”

I shoved the rubbers towards Al, snapped up my five bucks, and ran for the door.