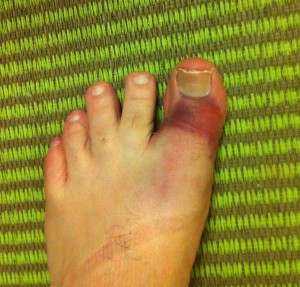 I’m a big fan of child safety. No, seriously. Plastic drawer catches, anti-tip TV straps, coffee table edge protectors, toilet seat locks and door knob covers; all are important components of any infant’s living space—yes, even those damn irritating electrical outlet plugs that have to be pried out of the wall with a butterknife every time the slightest amount of AC power is required.

This attitude is not a result of an infant Mr. Ass tumbling down the stairs in his walker one day and smacking his head on the concrete at the bottom of the stairwell. That event might explain a number of other things, but not his interest in child safety. And besides, when one’s older brother leaves the door open—some say intentionally—accidents such as these are bound to happen, no matter how large the investment in safety devices.

My interest is explained simply: I now have a granddaughter, whom I love very much. It’s important that she is kept safe. Despite this, I have to say something here: some people carry child safety just a bit too far.

Take the Captain, for instance. Ever since he realized that his daughter—my granddaughter—had inherited a disproportionately large percentage of her mother’s genetic material and was therefore not only physically perfect (no lumpy elbows or irregularly shaped heads here) but would be an early walker, talker, and possible troublemaker, this guy has taken home childproofing to a new level.

As such, their home in San Diego has more monitoring devices, drawer latches, door locks, and safety gates than any ten KinderCares or Bright Horizons. But it’s this last safety device—the gate—that caused the problem last week.

The Nordic Warrior Queen and I were upstairs packing for our big Hawaiian vacation. We’d stopped in San Diego for a few days, intending to fly from there to Los Angeles and then on to Oahu. In order to avoid paying baggage fees to those greedy, price-gouging-bastard airlines, we crammed as much as possible into our overhead-sized suitcases. They looked like, and weighed as much as, two huge, overstuffed bricks.

I was shoving a few last minute items into my computer bag. She had just dragged the lighter of the two suitcases down the stairs. I picked up my suitcase and bag and was following her downstairs when I heard a strange thump, followed by laughter.

“Yes, I’m fine. Just tripped over the gate is all.” It was the Captain who was laughing. He’s like that sometimes.

When I reached the bottom, there stood my wife, rubbing her knee, a small grimace on her lovely face. My son-in-law sat on the couch, tears of laughter pouring from his eyes. I scowled at him and lifted my suitcase over the gate, setting it on the far side. Computer bag in hand, I stepped over, not bothering to unlatch the gate and swing it out of the way.

It was the weight of the bags that did it, not any athletic failing on my part. That, and the fact that the Captain mounted the damned gate high enough to restrain even Shaquille O’Neal. When I tried to climb over I caught my foot and immediately belly-flopped to the floor. Epic fail. My computer bag went flying one direction, my suitcase the other, while I made a perfect three-point landing on my chin, toe, and belly. Ouch.

“Are you okay?” asked my wife.

“Yes, yes, I’m fine. Let’s get going.” Ignoring my temporary son-in-law, I limped out to my daughter’s car, dragging the bags behind me. As we pulled away, the Nordic Warrior Queen leaned over to pull some carpet fibers from my bruised chin.

My toe throbbed the entire flight. It wasn’t until we landed in Hawaii and checked in to the hotel, eleven hours later, that I could assess the damage.

It was only ten o’clock in San Diego by then, so I figured I might as well email a picture of my toe to the Captain. Of course he said he felt bad for laughing, but I don’t believe him. In fact, I’m planning my revenge. The Captain’s house might be safe, but he’s not.

Sleep well, Burris. When you least expect it…

Previous Post
« The Bachelorette Party
Next Post
Excerpt from a Conversation in a Hawaiian Convenience Store while on Vacation »
Mr. Ass
Calotropis Theme designed by itx