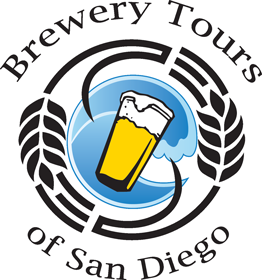 It was a big problem. What to get the Captain, my son-in –law, for his birthday? A stocking cap perhaps, to keep his Telly Savalas-like head warm in the blisteringly cold San Diego weather? No, the only time he wears a hat is on the boat, and that one’s covered in little red and white flecks of fish goo and squid guts. Yuck.

How about a new fishing pole? No, he already has an entire garage wall and most of one stall devoted to fish-catching apparatus. My daughter told him “one more pole and you’re sleeping in the garage.”

Hmm, let’s see. What do guys like to do most on their birthday? No, no, NO! I don’t mean sex. I don’t even want to think about what that man does to my little girl.

And then I had it. Beer! Of course: a San Diego brewery tour. Not only did it solve the nagging problem of what to buy for the guy who stole your only daughter, but since I couldn’t send him alone, I would have to go along. Just to keep him out of trouble.

So I ordered the tickets and mailed them inside his birthday card. Happy Birthday, Captain.

Weeks later, the big day was finally here. The Nordic Warrior Queen and I arrived in San Diego the night before. We were coming out for our granddaughter Kaylie’s first birthday party next weekend, so the timing was perfect. The brewery tour started on Friday noon, at a small downtown brewpub named The Local.

The Captain and I took the trolley to the launching point downtown. Not only did this avoid the hassle of trying to find parking in San Diego, but the trip back to the Park ‘n Ride afterwards would provide additional time in which to sober up after the brewery tour. Besides, what’s better than making fun of all the funny looking people on the Public Transit System after you’ve had a few beers (or even before, for that matter)?

Sitting at The Local, we waited anxiously for the tour bus to arrive, filling up on complex carbohydrates and iced tea in preparation for an afternoon of drinking. Suddenly the door opened and a gaggle of rowdy women stumbled through the door, sat down, and began hollering for beers. Eric and I looked at one another with a shared feeling of dread. Oh, no. A bachelorette party.

Sure enough, the bus driver arrived a few minutes later. He introduced himself as Mike and gave each of us a blue wrist band to identify ourselves as participants on the beer tour. The girls immediately began calling him Mikey, asked him to take a picture of the group, and ordered more beer.

How was I going to explain to my wife that I’d spent the afternoon out barhopping with six drunk Mexican chicks, a chubby Chinese girl, and a probable cross-dresser named Jackie?

Minutes later, we all piled into a white Ford Econoline van with what looked like the letters SOBERBUS painted on the side. This seemed quite ironic considering the circumstances.

The girls immediately started in:

“That girl is SUCH a biotch,” said Anna.

“God, my ass just gets bigger and bigger,” complained Sue, the Chinese girl.

“I had my boobs done up in LA. Don’t they look perky? Here, touch them.” This from the cross-dresser

“I was afraid his crazy ass fucking girlfriend was going to shoot me the next day,” said a Mexican girl with a huge, flat nose. She looked like Stitch’s best friend Lilo.

“So, I bought this pimple thong,” whined a skinny girl with a tall forehead and lots of facial hair, “and that asshole went to the beach with his friends anyway.” I had no idea who she was talking about, but looking at the girl, I couldn’t really blame him.

Cries of “what a bastard” and “I was giving him a lap dance and he…” and “you better not puke, girl” and “those big shit nigger bitches” rang through the bus. The air was filled with the cloying reek of Chanel #5 and stale beer, and by the time we got to the third brewery, Jackie the cross-dresser was hitting on Mikey, and Paula and Nicole were discussing pillow fights and wondering how many of them could fit in the hotel shower at the same time.

Lilo pulled out her iPod and plugged it into the Econoline’s factory sound system. “Listen up, you bitches,” she yelled. “We are gonna PAARTYYYY!” The van’s cheap speakers thumped with brief snatches of head-pounding Latino music, intermixed with bits of Shakira, J-Lo, and a heartfelt  but tuneless rendition of Cyndi Lauper’s “Girls, just want to have fuh-uhn” by six bridesmaids, a soon-to-be-bride, and a very drunk maid of honor.

When the tour was finally over, we pulled up in front of The Local and the girls spilled out. The last I saw of them, they were stumbling off to the Yard House, or maybe Rock Bottom, singing R-E-S-P-E-C-T.

Mike tried to return the twenty bucks I tipped him, saying he was sorry for the whole thing, but I told him not to worry about it. Eric and I shook his hand and headed for the trolley. Forty-five minutes later, we walked through the front door. Jamie and the Nordic Warrior Queen were there waiting for us.

With my newfound understanding of how women really act when they’re together, I could only think of one thing to say. “Howz it going, bitches?”