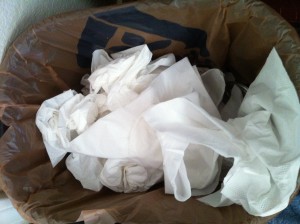 And once every 20-30 years, a particularly nasty strain of influenza pops up and proceeds to wipe out a couple million of us before epidemiologists can get it under control. Scary.

Less than 100 years ago, the mother of all flu pandemics – the Spanish Flu – claimed somewhere between 50-100 million victims. There were so many dead that health officials couldn’t keep track of them all, and bodies were left to rot in houses for days.

Jesus – why do I read this crap when I’m sick? Now I’m going to have nightmares. Maybe I should just reread Stephen King’s The Stand while I’m at it.

I might not even have the flu. It could just be the common cold. Of course, the World Health Organization – the WHO – says even Acute Nasopharyngitis (common cold) can be deadly: an estimated 1000 people each year pass into the ethereal plane while bitching about their sore throat, sneezing, and watery eyes.

The WHO also says several dozen people die of flatulence each year. How would that look on a tombstone: Here lies Kip. He farted himself into eternity.

There are worse ways to go, I suppose.

Anyway, the Nordic Warrior Queen has been taking good care of me. She brings me water and juice (but no beer, alas) and she made me a sandwich last night. She even bought me a box of Kleenex with Aloe, for my sore nose.

The box is almost empty, however, and she hasn’t brought me another; I think she might be growing tired of what she considers to be a long convalescence.

I think I’ll take a nap, while I still can. If I don’t wake up, you’ll know why.