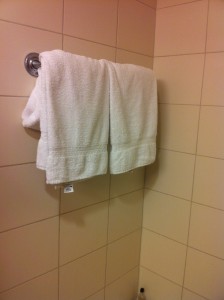 It wasn’t my fault. Really. I mean, who hangs the bath towels inside the shower? I’ve stayed in a lot of hotels, but until now, I’d never encountered this situation.

One might argue I should have seen them there before starting the shower, that sometime between hot-water-on and scrub-a-dub-dub, I would have noticed that the means for getting out of the shower was hanging in the shower.

Sadly, this was not the case. By the time I achieved squeaky clean status, flipped the water off, and finally looked around for a way to dry off, my towels were a sodden, dripping mess. Fuck.

I was left with one hand-towel, two washrags, and a roll of toilet paper. I knew before I even tried it that the toilet paper was a bad idea, but still I gave it the old college try. By the time I was done, I looked like a pathetic excuse for an abominable snowman; that, or a prematurely balding polar bear. I had white clumps of shit hanging on me from head to toe.

So I did the best I could. By tying the two washrags and the hand-towel end to end, I constructed a lumpy linen substitute – a mockery of a bath towel. I considered hanging myself with it, but my impromptu rope was barely long enough for even a midget to commit suicide.

Resigned to my situation, I wrapped myself in my crude loincloth, waddled out to the nightstand, picked up the phone, and called the front desk.

Ring, ring, ring. Click. “Good morning, Mr. Kip. This is Esmerelda. How can I help you?”

I wasn’t feeling very sociable. “Send me up some towels.”

“Mr. Kip, did you check inside the shower? There should be towels hanging there. Do you need more?” She sounded quite concerned.

“Esmerelda. Send me some towels.”

“But…Mr. Kip. Each guest receives two bath towels per day. Is that not…”

Five shivering, goosebump-filled minutes later, there was a light knock at the door. “Room service.” It was Enrique.

I cracked the door open, intending to grab the towels quickly and shut the door, but luck was against me that day. Enrique was determined to know the fate of the other bath towels. Before I knew it, he stood inside the room, trying to understand why I was dressed in the Forest Gump of bathrobes and covered with sopping clumps of double-ply Charmin. “Mr. Kip? Are you okay?” He seemed genuinely distressed.

“Enrique. Give me the fucking towels and get out.”

“I’ll tell you what happened. You idiots hung the towels in the shower. Who does that, Enrique?” My voice took on an alarming pitch; my breath caught. “What college-educated hotel room designer puts the towel rod INSIDE the shower, Enrique? Can you answer that one question?”

Enrique’s face took on a perplexed look, as though struggling with a particularly difficult math problem. “But…Mr. Kip. All the rooms…they have…the towels…they,” his voice trailed off.

“Thank you, Enrique.” I took a deep breath. “Now. Just go.” I pulled the towels from his hands and shoved him into the hall. “Have a nice day,” I said, and as I slammed the door, I heard him wail, “But we’ve never had this problem before, Meester Ki…”

I dried off, got dressed, then waited as long as possible before leaving my room, in hopes that Enrique and Esmerelda had gone home for the day, or were taking a long morning break, and I could get out unnoticed. But it wasn’t to be.

As I walked through the hotel lobby, all eyes were on me. Not only had the story of the wet towels been passed among the hotel staff, but even the guests now knew about it. All I could do was hold my head high, and look forward to going home on Friday.

It wasn’t until several hours later that I realized there was a big wad of Charmin stuck to the back of my head.