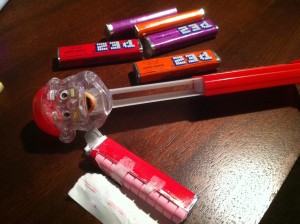 When I was a kid, it was all so simple. I could load one of these up – Donald Duck, Mickey Mouse, even Frosty the Snowman, it didn’t matter – in about four seconds flat, all while watching The Brady Bunch, or Gilligan’s Island. And I never once dropped a single piece of candy.

What the hell happened?

I’m talking about PEZ dispensers. Someone put one of these in my stocking for Christmas. It was a merry old Saint Nick model, together with six or eight of those little packs of candy. Assorted flavors, like Cherry, Grape, and Orange. Cherry was always my favorite.

I could probably hand a PEZ dispenser to anyone on the planet – as long as he or she is under eleven years of age and boasts an IQ of at least 72 – and they’d be popping candy into their mouth in no time.

You don’t need instructions to load a PEZ dispenser, but somehow I spent fifteen minutes just getting the fucker out of the plastic thermoform package. There was a small crack in Santa’s stupid grinning head by the time I was done.

Then it took me another five minutes to open the candy pack, and when I finally did, the candy flew all over the place. The Nordic Warrior Queen’s little mutt immediately ran in and began snarfing up the PEZ candies like they were some sort of new Kibbles and Bits. Since then she’s been crapping grape-colored turds all over the house.

I took a deep breath and carefully opened another pack of candy. This one was orange-flavored. Success! I spent a few minutes rearranging the stack so it would be ready for insertion into the PEZ dispenser, then pulled the spring loaded end down with one hand while gently lifting the stack of orange-flavored mini-bricks.

I was halfway there when disaster struck. Two events took place simultaneously – the stack collapsed, spraying orange candy all over my desk like a deck of cards. At the same time, the ass end of the contraption snapped shut, pinching the hell out of my finger and giving me a plastic cut on my pinky which later required several stitches.

They ought to put a warning label on these things.

After bandaging my hand, I gave it another try. This time I was slightly more successful – I managed to get half the candy into the device’s plastic torture rack, but somehow the other half wedged itself in there sideways. I tried to pick the trapped confections out with the only thing I had handy – a ballpoint pen – but I broke one of the plastic rails while doing so and ended up coloring the sideways bits of candy with blue ink. I’ll probably get food poisoning.

In the end I said screw it, and chucked the Santa Claus PEZ dispenser in the trash. Besides, it wouldn’t close anymore. I broke open the remaining packages and poured them into my wife’s candy dish. As it turns out, they taste like crap anyway. Maybe I’ll feed them to the dog.