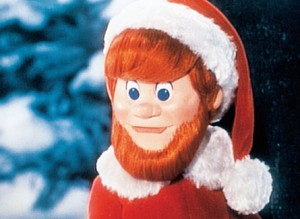 We were way behind schedule. Dancer and Prancer had started my morning off by breaking into the stores of magic corn, and had been laying down some serious reindeer games all day long; poor Rudolph was near tears. And of course, I’d told the team to go easy with the carbs on Christmas Eve, but did they listen? No. Now I was flying over suburban Minneapolis, stuck behind a team of flatulent reindeer while trying to find little Susie’s house. Good God, how much worse could it get?

In the back seat, Jingle and Jangle were starting on their forty-first rendition of Silent Night; I was ready to push them both out of the sled. I turned around to unleash a mighty can of whoop-ass on their elvish butts and accidentally flew through the jet-wash of a Minneapolis-St. Paul bound red-eye. We spun around three times, turned turtle, and by the time I got us right-side up there were toys, candy, and reindeer shit flying everywhere.

Finally, I spotted Susie’s house up ahead. I landed on the rooftop, leaped down the chimney, dumped the packages by the tree and got the hell out of there. And by the time I made it back up top, those fucking elves were fighting over which one of them could do the best Bruce Lee round-kick. I can’t believe the rotten help these days. I knocked their stockinged heads together and told them to straighten up or they were out. Am I the only responsible one in the entire North Pole?

Next up was Charlie’s house: another baseball mitt. Jesus, what does that kid do with them all? I’d already started my take-off procedure when I felt Jingle pulling at my sleeve. “What is it this time?” I yelled. He pointed across the street. Oh, crap: Johnny’s house. I shook my head; no way. That kid blew his chance two years ago when he set up a rope snare next to the cookies and milk. If I weren’t lactose-intolerant, he would have caught me for sure. I had no intention of going back.

But what the hell, people change, right? Somewhat reluctantly, I took off and circled his two-story, looking for traps. I landed near the edge of the roof so I could make a quick get away if he tried to pull any shit. Jumping out, I warned the elves, “Don’t touch anything,” then grabbed the cheapest gift I could find and headed towards the chimney. But just as I was starting down, there was a bright flash of light to my left, followed by a scream; Johnny had done it to me again.

There behind the sled runners was a trip wire — I’d missed it by inches. And since these elves don’t listen to a damn thing I say, the second I turned my back they’d jumped out and gone hunting for the eggnog I had stashed in the trunk. The trip wire was attached to a digital camera that Johnny had duct-taped to the satellite dish; the instant Jingle touched the wire, the camera flash went off, blinding them in the darkness. They walked right over the edge!

I should have been able to catch them. We’d trained for situations like this. But by the time I made my way across the roof, it was too late. Luckily, I was able to grab Jangle mid-air. I heaved him up onto the roof and dove for Jingle, and if he hadn’t eaten so damn much Figgy Pudding, I might have pulled it off. But as it was, I snagged the back of his jacket only to have it tear away in my hands. He struck a large pine tree, bounced like a rag doll from limb to limb and landed in a snowdrift.  Christ on a crutch, what a mess.

I confiscated Johnny’s camera, then tried to decide what to do with Jingle. Where do you take an elf with a broken leg at two o’clock in the morning on Christmas Day? I had no choice, really. I gave him fifty bucks and dropped him off at the Emergency Room of Minneapolis Medical Center, hoping that nobody called the cops on him as a cross-dresser or something. It was either that or cancel Christmas. Luckily there are so many weirdos running around these days that nobody gave him a second look. All’s well as ends well, I guess. But there’s one thing I know for sure: next year, that little bastard Johnny is getting coal.

(Originally published at this time last year by the good people at Every Day Fiction, http://www.everydayfiction.com)

Previous Post
« In case I missed anyone…
Next Post
One Unhappy Partridge »
Mr. Ass
Calotropis Theme designed by itx