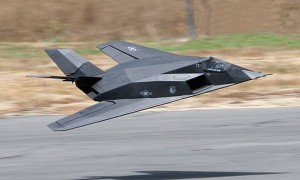 There’s a field not far from my house where a bunch of guys fly model airplanes: Corsairs and Messerschmitts, Fokkers and Sopwith Camel biplanes, neat Piper Cubs, sleek F16s and huge lumbering B17 Flying Fortresses. There’s even a miniature Huey UH-1A helicopter, complete with a door gun. All day long you can hear the drone, rattle, and buzz of them out there, along with the excited hoots and hollers of their owners.

So I walked over there one day, just to see what all the fuss was about. As it turns out, these guys have a club, the Arizona Airmasters. Their President is a diminutive, pale-skinned Bashas grocery bagger named Bob “The Stallion” Bartman, his nickname earned due to a mastery of a replica P-51 Mustang, one with a four-foot wingspan and a toothy-grinned plastic pilot dubbed Sir Ackley.

I stood off to the side watching until The Stallion finally approached me. I introduced myself and put out my hand in greeting. He reluctantly gave me a damp handshake in return. He seemed uncomfortable with my being there. “I’m Bob Bartman,” he mumbled with a nasal twang.

I said the only thing possible. “Nice plane you’ve got there, Bob.”

“Umm…thanks.” His mood seemed to brighten a little after the compliment and he proceeded to tell me all about the Arizona Airmasters – their meeting times (which were most of each day), their contests (monthly, sometimes weekly), and membership benefits (and fees). He finished by stating the obvious. “You can only be in our club if you have a plane, you know.” He sneered as he said it, as though I wasn’t capable of piloting a radio-controlled aircraft.

I’ve always been interested in model airplanes – when I was thirteen, I assembled a 1:40 scale model of a Boeing B-29 Bomber during the course of summer vacation, dubbing my plastic creation the Enola Gay and flying it from my mother’s clothesline over a life-like, pre-incineration replica of Hiroshima via a complicated mechanism of kite string and coat hangers, at least until such time as the plane caught fire and melted due to a less than judicious application of gasoline, used in an attempt to simulate an atomic firestorm.

I wasn’t about to be left out of the Arizona Airmaster club by the likes of Bob “The Stallion” Bartman. I immediately jumped into the car and headed to the nearest hobby store.

The proprietor of the Hobby Hut is a young gentleman with the unlikely name of Ronald Reagan. He seemed a bit embarrassed by his namesake so I withheld the obvious wisecracks and referred to him simply as Ron. Ron knew all about the Arizona Airmasters, and immediately began making recommendations for various beginner aircraft. I stopped him with a raised hand. “Ron, I want the biggest, meanest, fastest airplane you’ve got.”

Ron shook his head. “Well, that would be the F-117 Nighthawk. It’s jet-powered, stealthy, and capable of mach one. It can even be outfitted for dropping live ordnance – lead pellets and paint bombs and such. But I can’t sell it to you.”

A stealth bomber. This was just thing to put The Stallion in his place. “Why not?”

I tried to act offended. “Ronald,” I said. “I’m an RC expert. I’ve flown jets, space shuttles, and dirigibles. If it has wings, I can pilot it. My friends call me Top Gun. Now give me the damned plane.”

He looked skeptical but acquiesced. Eight-hundred dollars and fifteen minutes later I walked out of the Hobby Hut, proud owner of an F-117 bomber, several gallons of jet fuel, and a 16-axis radio controller with 240 frequencies and a 5.2 mile range. It was time to show The Stallion who was who.