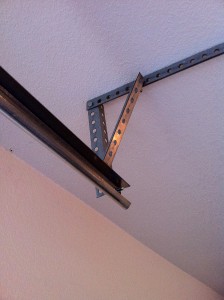 The Nordic Warrior Queen complained the other day about the messy state of my garage. “Get rid of all that junk,” she said. “You’re never going to use any of it.”

She just doesn’t understand. I don’t think any women do. Someday you might need a piston ring expander for a Chevy small-block, and one can never have too many crowbars. Okay, maybe the 300 foot tape measure is overkill, but that .22 caliber nail gun might come in really handy. And the laser-sighted miter box? No way. You can’t just throw things like that away.

I started to explain all this to her, but then realized it was a perfect excuse to get out of the house, waste endless hours in the garage pretending to organize my toolboxes, and drink really warm beer in the Arizona heat. “You’re right, dear. I’ll see you at dinner,” I told her.

She took the Sister Wife out shopping and left me to my work.

I started out by moving some boxes around. It had to at least make it look good.

One hour into it, things were really shaping up. I’d swept the place up, and knocked some cobwebs out of the corner. I tossed out a few jars of dusty screws, sorted and stacked some old magazines. I even organized my screwdrivers by function and size. They looked really nice.

I was ready to call it a day. It was really hot out there, and the beer was gone. Besides, I had to pee. That’s when I made the mistake.

I’d always meant to properly hang my retractable trouble light, instead of just tying it to my toolbox and using it as some sort of awkward extension cord. I suppose I might have zip-tied it to the angle iron that supported the garage door opener, but damn it, I wanted to do it right. So I decided to mount it to the ceiling with the little U-shaped Chinese clip that came with it.

Standing at the very top of my little step ladder, I drilled the holes, inserted the plastic expanding anchors, and tightened everything in place. Perfect. Now all I had to do was attach the trouble light reel to the clip. It was harder than it looked. No matter how I tried, I couldn’t reach the little holes to insert the pin. I had to get higher. Jesus, I had to pee.

So I built a scaffolding out of Iron Mountain document boxes and some old 2x4s left over from the move. And then I climbed up.

It was pretty stable, considering it was made out of cardboard. And I would have made it. I should have been able to climb up there, slide across, and clip that sucker on there. Unfortunately, it didn’t work out that way. Just as I was nearing the apogee, the perfect position to insert the pin, something terrible happened.

The back of my pants snagged on the metal garage door track. You know, the thing the garage door goes up and down on. Crap. It went right up the back and under my belt. It was sharp. But maybe I could just back up. It would have worked, except I accidentally kicked one of the 2x4s and it fell, bounced twice with a SPROING, and proceeded to topple both stacks of Iron Mountain boxes.

So there I was, hanging by the back of my pants from the garage door track. And I really had to pee, especially now that I had 200 pounds of Kip pressing against my bladder. I didn’t want to, but I really had no other choice. I pulled Mr. Evinrude out of the boathouse and let him run.

Well, that was the precise moment when Hector the Maintenance Man (you remember Hector, right?) drove past in his utility cart. And he stopped. Which was a good thing, really, because I might still be hanging there if he hadn’t. As he climbed off the cart, I heard him mumble something like “la madre que te parió,” which I’m sure means I’ll be right there to help.

Hector walked into the garage to survey the jumble of urine-stained boxes. He looked up at me, dangling by the back of my pants. “Sir, urinating on the property is prohibited.”

“Jesus Christ, Hector. Will you help me down?”

“I’m afraid I’ll have to report this.”

“Okay, fine. Report me Hector, but give me a hand first.”

He hesitated. I’m sure he considered leaving me there, and closing the door behind him. I would have been mummified within a day in the triple-digit heat. But finally Hector relented; driving his cart into the garage, he smashed a number of boxes to park directly beneath me, then climbed up and lifted me off the rail.

Hector got back onto his green utility cart and left me standing there amidst the wreckage. As he pulled away, I heard him say over his shoulder, “And you’re not supposed to mount equipment in your garage. I have to report this.”