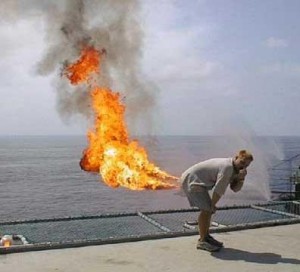 You’re standing in line at the grocery store, or maybe sitting in a crowded theater, when the urge to pass gas strikes. So what do you do? You could step out of line and head over to the produce section, where your bodily odors will mingle harmlessly with the foul stench of the broccoli.

Or you could get up in the middle of the movie you just paid ten bucks to see and head out to the lobby, safely venting your ham and egg omelette while pretending to study the poster for Rambo, Part V.

The more stoic among us would sit there and hold it, pinching their butt cheeks together until hemorrhoids threaten.

Well, I don’t know about the rest of you, but I’m not going to sit there feeling uncomfortable for the sake of a bunch of complete strangers. I cut loose, crossing my fingers that the fallout isn’t too nasty.

And if it does turn out to be a bad one, you can always pretend it was the old lady in front of you, acting all offended and rolling your eyes while pointing an underhanded finger at her backside. Her senses are so far gone she won’t smell it anyway.

Everyone knows that your own farts smell…well, not minty fresh, but certainly they’re not as bad as what comes out of other people’s asses  What’s up with that? It’s not like I treat myself to any late-night covered wagons, but neither will I rush to open any windows after a night of sauerkraut sandwiches.

It’s a mystery to me. Can someone please explain it?