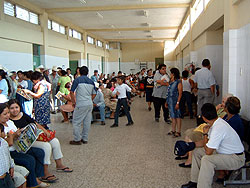 Sitting around the hospital, waiting to bring your new baby home…it’s tough work. The nurses and doctors rushing about, the weird people wandering slowly down the hallway with their asses hanging out of their robes.

And then there’s the waiting room itself: the TV turned up too loud, the uncomfortable chairs, the strangers coughing and sniffing their noses and speaking in languages you can’t understand, never mind those grueling trips to the vending machines to get stale chips and bad coffee. It’s all very stressful.

And the tests. Holy cow. My new granddaughter had an X-ray, an EKG, an EEG, a hearing screen, blood tests, stress tests, urine tests, eye exams. This kid had more tests in the first two days than I’ve had…well, ever. And what’s all this fascination with the poop: measuring the amount, the quality, texture, and color. It’s just baby shit, people!

Having a baby is much different now than it was when my kids were born. Back then, mothers thought nothing of smoking during pregnancy – even a six-pack on the weekends was considered safe. And there were no off limits foods like sushi and semi-cooked eggs and Danish cheese. Expectant mothers even cleaned their own cat’s litter pans.

After nine months, give or take, you’d take your wife to the hospital, holding her hand while she pushed and you watched Dynasty reruns on TV. Pretty soon she’d be over there making those silly hee-hee-hah breathing sounds she’d learned in pregnancy class, but which everyone knows only make a woman dizzy enough to distract her from the incredible feeling of crapping out a watermelon. A few hours of this, and a squalling brat would pop out from under the sheet; they’d smack it on the ass, give it a quick wipe, and off you’d go.

Baby making was no big deal.