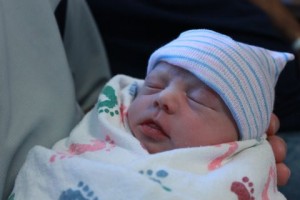 My daughter’s been at the hospital since Saturday morning, busy making a baby. It was a lot of work, and as usual, she tackled the job and got it done right. She was accompanied by some excellent company, including the Nordic Warrior Queen, the Homeless Lady, a plethora of friends and various family, as well as the Catsitter, whom I hold personally responsible for the entire situation in the first place.

Sadly, I missed it, and didn’t arrive here until the excitement was all over. But Jamie was in good hands, and my thanks goes to all who supported her. Today she and the Captain are bringing home a beautiful baby girl, Kaylie Marie Burris, born on the afternoon of April 23rd. She topped the scales at 5 lbs, 7 ounces, about the same size as a large Spotted Bass, Eric.

Little Kaylie shares her birthday with the father of quantum theory, Max Planck, whose work certainly set the foundation for the development of the atomic bomb. Filmmaker Michael Moore was born on this day, as was the Six-Million Dollar Man, Lee Majors. And Roy Orbison made his first sounds on April 23rd, 1936, although it would be years before he ever crooned Pretty Woman.

Coca Cola made the poor business decision to release New Coke on this day, and Confederate President Jefferson Davis admitted to his wife that the shit was starting to hit the fan in his war with those damned Yankees. Smart people ought to know there are some things you just shouldn’t mess with.

Sirhan Sirhan received the bad news that he would be executed for shooting Bobby Kennedy in the hotel kitchen, but those kind-hearted Californians never quite found the stomach to follow through with it; he’s still in a Fresno prison today, enjoying the sunlight, watching HBO, and working on his next parole petition.

Hollywood greats Sandra Dee, Valerie Bertinelli, and Shirley Temple were all born on April 23rd. They’re all a credit to their work. And nobody seems quite certain, but most agree that Shakespeare’s first thought after departing the dark void of his mother’s womb was “to be, or not to be,” on this day in 1564.

Our little girl shares her day with some famous people alright, but I still say she’s more perfect than all of them put together. Happy Birthday, Kaylie Marie, and welcome to planet Earth.