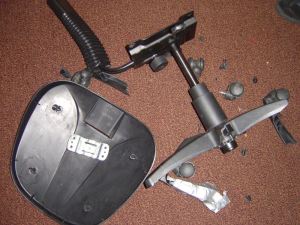 The last time we towed was a few years ago. The Nordic Warrior Queen and I had moved to Arizona some time before, and after renting for a while, finally decided we liked it here enough to stay and bought a new home on the other side of the subdivision. Kirby flew down from Minnesota to help – after all, who do you call but your brother when you need help moving?

After several sweaty hours of backbreaking labor, we were down to the flotsam and jetsam of our moving day – two lamps, a few boxes of books, assorted houseplants, a desk, and miscellaneous items from the garage. We loaded up the back of my pickup and had a couple beers to celebrate the last of it. But as I made one final pass through the house, I found we’d forgotten my office chair. I wheeled it out to the driveway but found there was no way to fit it in the final load, and neither of us felt much like making another trip.

With a grin, Kirby tossed me a length of rope and made his end fast to the bumper. I grabbed a motorcycle helmet from the back of the truck and strapped it to my head (safety first remains our motto), took two turns of the rope around my right hand, and sat down in the office chair. I gave the rope a little shake and said “giddyup.”

Kirby peeled out of the driveway, his tires smoking, with me and the chair swinging twenty feet behind and hanging on for dear life. I nearly took out the neighbor’s mailbox on the first turn but corrected at the last minute, then ricocheted across the street and bounced off the curb. We made the corner and I leaned into it as he hit second gear, narrowly avoiding an old Mazda RX7 parked on the curb.

I could smell plastic burning by now and stole a quick glance down to see the wheels starting to smoke. Kirby made the final turn into my street just as they melted down to the metal core and the axles seized up tight. I leaped for safety. The chair cartwheeled behind me, tumbled into my new neighbor’s front yard, and slammed into a cactus.

It wasn’t long after that my sister called to tell me that Kirby needed surgery. The doctors had pulled a tumor the size of a golf-ball from his head. She said that Kirby was quite proud of his scar – it looked like a big question mark – and was referring to the hole in his brain as “the void.”

I hung up the phone and sat for a while, thinking, then went out to the shed and looked at the tools hanging there, alongside the boxes of junk and spare parts. I pulled down an old wooden crate full of rusty chains and bits of frayed cable. There inside was the big yellow tow strap I’d bought so many years before. I stuck my face into the box and breathed deeply the smells of oil and grease and chafed asphalt.

Just then, the phone rang. It was my kid calling; his car was broken down and he needed a tow.