The Towing, Part I – Officer Anderson 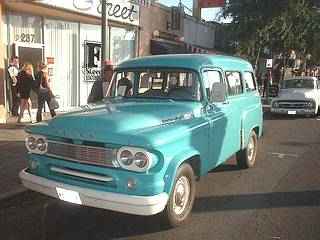 The Nordic Warrior Queen and I had been married just a few short months. We were living in beautiful New Hope, in an apartment overlooking Highway 18. Back then, long before Highway 18 was renamed to Highway 169, Kirby was the proud owner of a baby blue 1965 Dodge Power-Wagon, affectionately known as the Ice Cream truck. Maybe you’ve heard of it.

We called it the Ice Cream Truck because it was identical to one my Uncle Boyd once owned. Boyd had worked at Kemps Dairy ever since…well, since forever, and had adorned his vehicles with “It’s the Cows” stickers, and stuck magnetic Kemps logos on the bumpers and doors. As kids on summer vacation at Boyd’s, we subsisted on cottage cheese and chocolate milk, and my Aunt Shirley catered massive family events on nothing more than ice cream, cheese, and other assorted dairy products.

And so, one wintry night in our cozy apartment, Diane and I were watching the snow out the balcony window. Living on the second floor, we had an excellent view of the evening traffic, and we were enjoying the pretty scene below as the snow blanketed the trees, the parking lot and distant Highway 18.

But we soon came to realize that the northbound lanes, those coming towards us on Highway 18, were completely empty of cars. This seemed strange. Off in the distance was a glimmer of red-flashing lights, so I assumed there’d been an accident, when suddenly I saw a lone vehicle coming down the highway. As the vehicle veered on to our exit, I realized it was the Ice-Cream truck, traveling at high speed.

I watched Kirby race down the street and spin into our parking lot, jump out of the truck and run into the apartment building. Moments later, I heard footsteps pounding down the hallway and the front door swung open with a crash. Kirby ran in, breathless and wild-eyed. He rushed over to where we stood by the window and pointed down at the highway. “You see those lights,” he exclaimed. “They’re for me!”

I threw on some shoes and a jacket and we ran out to the parking lot. The Ice-Cream truck had suffered an enormous cave-in on the left rear quarter-panel and driver’s side door, where a perfectly-formed, four-sided dent ran vertically from roof to carriage. It was at least a foot deep: well into the driver’s seat and past the midpoint of the steering wheel. The indentation was so neat and uniform it appeared to be machine-made. There was another four-sided dent immediately behind the cab along the roof edge, this one horizontal.

We both began to laugh at the sight. I looked to him for an explanation, but just then we heard sirens coming down Highway 18. Luckily, the apartment complex had underground parking, so we jumped in, quickly circled the parking lot, and pulled the Ice-Cream truck indoors. Safely hidden from the authorities, Kirby described what had happened.

He’d left work around four that afternoon and gone to meet a buddy for a beer. One beer had turned into seven, upon which the serious drinking began. Several hours later, he’d decided to come visit his brother. It had been snowing for several hours by then and the roads were slick, which was lucky for Kirby because it masked his erratic driving; but sadly, not enough to avoid detection by the cops.

He was pulled over just south of Hopkins.

The cop got out of his squad car and walked up to Kirby’s truck. He introduced himself as Officer Anderson and asked Kirby for his name, then asked if Kirby had been drinking, where he lived, and where he was going.

Now most people, knowing they’d had a bit too much at the bar and were about to spend the night in the drunk tank with a big love-starved Indian named Roy, would freeze up or at least stammer a bit, and the cop would instantly know they were lying – cops are good at that sort of thing – and off to the hoosegow you’d go.

But Kirby was a professional: he talked his way out of this impossible situation, citing the snow and the slippery roads, and went on to say he’d been working all day and just needed to get some sleep.

Officer Anderson apparently bought Kirby’s bullshit explanation and let him go with a warning to go straight home and to drive more carefully. And here Officer Anderson made his big mistake of the evening – he never asked Kirby for his license or registration.

And ten miles further north, as Kirby was almost to our exit, Officer Anderson flipped on his lights, intending to have a little chat with Kirby and see if he could explain his way out of several outstanding moving violations received years before. There were also a number of obscenely past due parking tickets and oh, let’s not forget the matter of the vehicle tabs expired since the previous October. Kirby was never accused of great attention to detail when it came the details of motor vehicle paperwork and traffic citations.

Of course, Kirby had been watching the Officer Anderson tailing him, and when the second cop appeared in his rear-view mirror, had steeled himself for what was surely to come.

So when the lights came on, Kirby was prepared, and quickly engaged his Klingon cloaking device, knowing that he could simply sneak off at the next exit and evade detection on the side streets, just as he’d done so many times before.

But disaster struck. What Kirby failed to account for were the slippery roads, and the fact that his right rear tire was a bit less than roadworthy (it was plain bald). As he sped up to increase the distance between him and his pursuers, he began to fishtail.

Being a good Minnesota driver, he turned the wheel into the spin, but overcorrected a bit and found himself spinning out of control, a baby blue tornado of doom whirling down Highway 18 at sixty miles per hour with two cops behind him and a crowd of late night-commuters around him scattering for the ditch.

Kirby saw a late-model Ford Pinto before him. He hit the gas and jacked the wheel to the right, avoiding the collision but sending him sideways off the icy pavement directly into one of the huge eight-sided, two-hundred feet tall metal light poles which line Highway 18.

It struck the Ice-Cream truck like a battering ram, crushing the driver’s side door and shattering the window. It would surely have killed Kirby had he not dove for the passenger side just instants before. The Ice-Cream truck bounced across the highway and came to a rest on the far shoulder.

A brief instant of calm passed. From the sanctuary of the Ice Cream truck, Kirby heard a strange whistling noise and looked up in time to see the light pole falling toward him in slow motion, big as a building, about to crush him. The pole struck the top of the truck with a resounding boom, then rebounded twenty feet into the air, crashed to the highway, bounced several times with a metallic BONG…BONG…BONG like the world’s largest church bell, and rolled down the highway to stop a short distance from Officer Anderson’s patrol car.

When Kirby pulled himself up from the floor of the truck, it was eerily quiet. Snowflakes drifted in through the broken window. He brushed bits of glass off his jacket and looked about. One hundred feet away, the squad cars of Officer Anderson and his backup sat sideways on the highway. Dozens of other cars lay scattered about, their drivers staring in awe at this once-in-a-lifetime sight before them. The monstrous light pole lay across Highway 18, completely blocking it, with Kirby on one side and the law on the other. The cops stepped out of their vehicles, radios in hand, frantically calling for reinforcements. Kirby was shocked at the carnage he had created and for the briefest of moments, considered giving himself up.

The faithful Ice-Cream truck had stalled, but Kirby turned the key, and after a frightful delay the engine started. He lurched away just as Officer Anderson leaped the light pole and sprinted after him.

The next morning, we decided it prudent to ditch the Ice-Cream truck. We watched the TV news for any sign of the previous night’s events, but it appeared that the media had not yet picked up on Kirby’s mischief. It was time to go. We pulled out of the underground parking garage around 7:00 and headed west on Highway 12. Luckily it was a typically gloomy Minnesota day and we were somewhat hidden by the darkness.

Two hours later, we arrived at Vintage Auto Sales in Grove City, Minnesota. Kirby parked the Ice-Cream truck up close to a fence, with the light pole-shaped dents and broken windows facing away from the office. He went inside to barter. I stayed outside and watched for the cops. Kirby and the salesman stood in the center of the small office, pointing and gesturing at various vehicles, and after fifteen minutes of haggling shook hands. Kirby walked out of the office moments later with the keys to a sinister looking, blood-red 1967 Belvedere II.

The Mighty Belvedere was born.